Ownership of Club: Individuals who own more than 10% of Tranmere Rovers Football Club are Mark & Nicola Palios, and Walutje Pte. Ltd (a company whose ultimate beneficial owner is PT Santinilawansa Lestari, which is 100% owned by Mr Sofjan Wanandi and Mrs Riantini Sutedja).

Gender Pay Gap
As we employ more than 250 people across Tranmere Rovers Football Club, we are required by law to carry out gender pay reporting under the Equality Act 2010 (Gender Pay Gap Information) Regulations 2017, and to publish our data. The gender pay gap analysis is a high-level review of pay within an organisation and shows the difference in the average pay between all men and women in a workforce.

This should not be confused with 'equal pay' which is a more specific legal concept that deals with the pay differences between men and women carrying out comparable jobs. A gender pay gap does not equate to the existence of an equal pay issue.

The data published below represents Tranmere Rovers Football Club only. It does not include data for Tranmere Rovers in the Community as this is a separate entity that does not employ over 250 people. Due to the COVID-19 outbreak, the Government Equalities Office and Equalities and Human Rights Commission suspended the enforcement of the gender pay gap deadlines for the reporting year, 2019/20. The Club has published data for the snapshot period of the 5th April 2020 as required by law. The full-pay of relevant employees form the basis of the gender pay gap calculations and this criteria excludes employees who were fully or partially furloughed during the snapshot period. As a result, the data is heavily distorted and therefore, we have retained the 2018 pay gap data on this page to provide information of the gender pay gap during a period where we were playing fixtures and did not have any staff on furlough.

The data below relates to those paid by the club in the snapshot period of 5th April 2018, and includes players and casual workers.

In order to produce out gender pay data, we are required to carry out six calculations that show the difference between the average earnings of men and women in the Club:

5. Proportion of males and females receiving a bonus payment

6. Proportion of males and females in each quartile band

The mandatory data below represents all Tranmere Rovers FC staff, including players and casual workers. We have also provided voluntary data which uses the same calculations but excludes players.

We understand that our professional players are generally our highest earning employees and are all male and the impact this has had on our gender pay data. It should be noted that our senior leadership team within football operations, including the first team manager, are all male which significantly contributes to the Club’s gender pay data. Tranmere Rovers FC is committed to promoting all forms of diversity across the Club and breaking the stereotypes associated with the football industry wherever possible. The Club will continue to develop and promote its Equality and Diversity policies and remain committed to providing opportunities for the very best candidates regardless of gender, ethnicity, background or any protected characteristics.

We confirm the data reported is accurate and signed off by a Director of the Company. 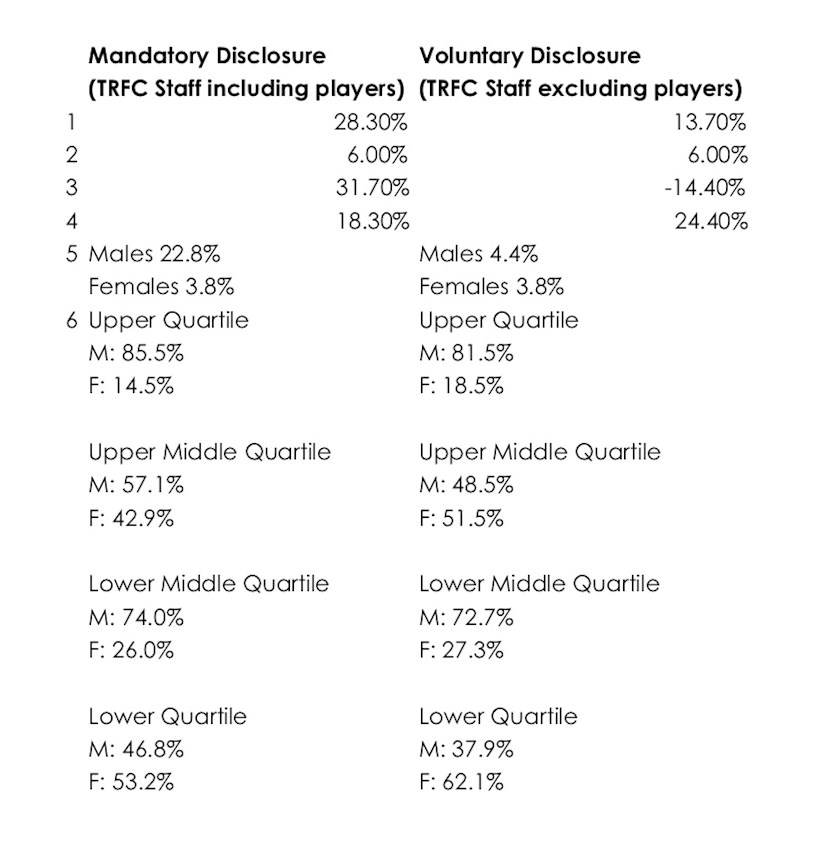 The data below relates to the snapshot period 5th April 2020.