Tranmere Rovers return to Prenton Park for their final home game of the regular season when they host fellow Sky Bet League Two promotion-rivals Bury, 7.45pm kick-off on Tuesday night.
Micky Mellon’s men are back in front of the SWA following on from a hard-fought goalless draw away to champions Lincoln City at Sincil Bank on Easter Monday.
Rovers, currently sixth, four-points from third-placed Mansfield Town, welcome Ryan Lowe’s Shakers to the Wirral, who are second after their 3-1 home triumph over Northampton Town at Gigg Lane last time out.
Team news
Mark Ellis is facing an extended period on the sidelines with a cruciate knee ligaments injury. Ishmael Miller will not play again this season either and is still in the early stages of his recovery.
Evan Gumbs has gone for a scan after an injury sustained against Lincoln City. Saturday's match will also come too soon for Liam Ridehalgh. Luke McCullough is also a long term absentee for Rovers.
On a positive front, David Perkins and Steve McNulty are back in training.
The Shakers season so far
Following on from their relegation back to the fourth-tier last term, Bury find themselves in second place in the division with two fixtures of the campaign to play.
Lowe’s side are on track to secure an immediate promotion back up to Sky Bet League One after returning to winning ways in their victory over the Cobblers.
From their 44 games played so far, the Shakers have won 22, drawn 11 and lost 11 along the way, which has seen move up to second behind champions Lincoln City after collecting 77 points, a point clear of fourth-placed MK Dons.
Should they earn a point at Prenton Park, they will seal promotion to League One.

One to watch
In form forward Nicky Maynard leads the way in Bury’s goal-scoring charts.
Born in Winsford, Cheshire, Maynard turned professional with Crewe Alexandra after coming through the Railwaymen’s academy.
He spent three-years at Gresty Road before moving to Bristol City in 2008, scoring 45 league goals in four seasons with the Ashton Gate club.
Further spells at West Ham United, Cardiff City, Wigan Athletic, MK Dons and Aberdeen followed before he linked up with Ryan Lowe’s Shakers back in September 2018.
This season, the 32-year-old has scored 21 goals for the Gigg Lane side as they eye promotion from Sky Bet League Two.
Tickets
Fancy heading down to Prenton Park on Tuesday night to watch some affordable football and cheer on Micky’s lads as TRFC welcome Bury the Wirral
Match tickets for our home game against Ryan Lowe’s Shakers are still available to purchase either in person at the Prenton Park ticket office or online by CLICKING HERE.
Tickets start from as little as just £2 for U12s and adults from £18 with family tickets available to save money. It is £2 cheaper to buy online, which we encourage all supporters to do.
Help us Pack the Park against Bury by joining the SWA and buying your
match tickets today for a cheaper rate than on the day!
TRFC’s online ticket store is also the perfect place to purchase tickets for upcoming Sky Bet League Two games, both home and away, and away coach travel.
Match Officials
Referee: David Webb
Assistants: Steven Meredith and Robert Merchant
Fourth Official: Matthew Donohue
Match Coverage
Can’t make it to Rovers’ home game against Bury on Tuesday? Don’t worry as you can keep up with goings on at Prenton Park.
You can now sign up to Tranmere Rovers’ iFollow, which allows access to extended highlights and interviews with manager Micky Mellon and a player, after the game.
To sign up, click here
Alternatively, you can follow the action through our social media channels below, with full text coverage during the fixture, followed by a match report.
Twitter: @tranmererovers
Facebook: @trfcofficial
Instagram: @tranmererovers 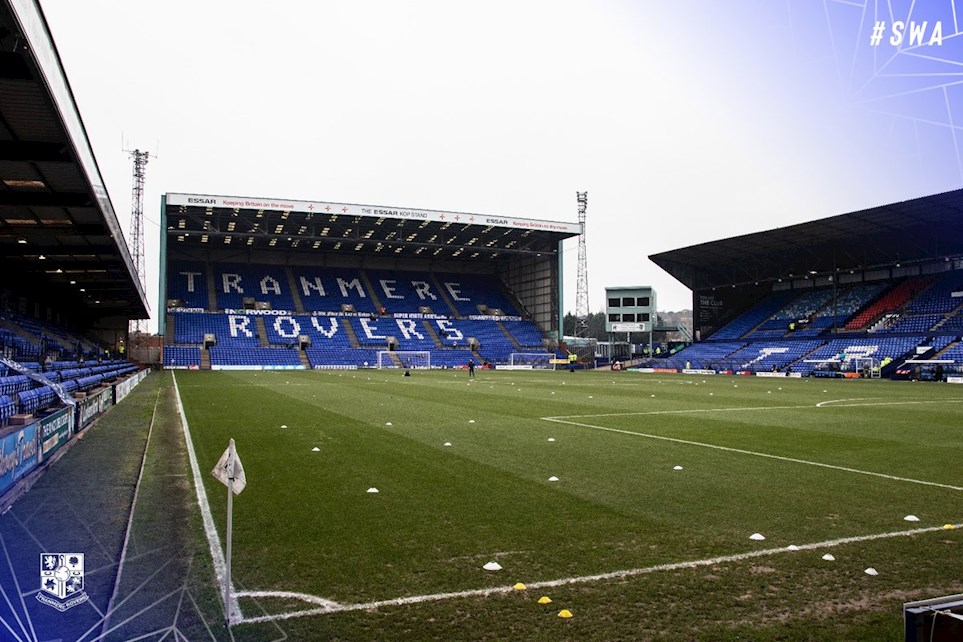 Tranmere Rovers secured their place in the League Two Play-Offs after a 1-1 draw against Bury at Prenton Park.

In the Club’s first season back in the EFL, Micky Mellon’s men have now secured their place in the top seven of the division, a fantastic achievement with a game to spare. It is also the third consecutive season the Club will compete in the Play-Offs, after the last two seasons in the National League.

Bury, knowing a point could take them to League One, nearly took the lead in the most fortunate circumstances. TRFC were temporarily down to ten men as Jay Harris needed his shirt changing and Bury capitalised with Nicky Adams finding space in the box to drive the ball over the cross bar.

However, in the 10th minute, Rovers raced into the lead as Norwood scored his 28th of the league campaign and 30th in all competitions. The Sky Bet League Two Player of the Year connected with an in-swinging corner from the right, and the ball trickled just over the line.

Prenton Park was bouncing and rightly so and Tranmere looked to add a second in the 22nd minute, Ollie Banks trying his luck from 25-yards, but the goalkeeper was equal to the effort.

A couple of minutes later, two massive opportunities came for both sides. The first, started by a perfectly timed tackle by Harris, resulted in Norwood going one on one with the Shakers goalkeeper, Joe Murphy, but the shot stopper made himself big to deny a second for TRFC’s number 10.

At the other end, Bury attacker, Dominic Telford, who looked to be in an offside position, was left in a glorious position bang in front of goal, but he struck wide of the post.

A wonderful lofted through ball from Ollie Banks on the half hour mark picked out Connor Jennings on the right wing to cut inside, but the former Macclesfield man missed the mark.

Norwood and Jennings both had two half opportunities before the interval, Murphy equal to the league top scorer’s chance, whilst Jennings put too much on his right foot to cause concern.

Bury flew out of the traps at the start of the second half, as Jay O’Shea was denied from the off by a great save by Scott Davies. A minute later, a dangerous cross from the left by former TRFC loanee Mayor, was headed against the post by experienced striker Nicky Maynard.

Davies was ensuring Rovers kept hold of their lead with another fabulous save, beating a Maynard strike from inside the box away as the Shakers were looking really dangerous.

The visitors pressure paid off in the 56th minute as Mayor’s strong run from just inside the Tranmere half was deflected past a helpless Davies, with the keeper wrong footed.

Tranmere had a fabulous chance to regain the lead on the hour mark, as a goal mouth scramble in the Bury box landed at Norwood’s feet, but the keeper got an arm on the ball to push away for a corner.

In terms of chances, the game quietened down as both teams looked for the all-important goal, but Bury knew what they had was enough to secure an immediate return to the third tier of English football and the game finished 1-1.

Before Tranmere’s Play-Off opponents are confirmed, they will face Crawley Town away from home on Saturday, 3pm kick-off.

#PackThePark has been a huge success in recent weeks as we have beaten our home league attendance for the past three League Two games.

More than 9,000 Tranmere supporters were in force at Prenton Park last Friday for the match against Forest Green Rovers, and we need your support once again on Tuesday at home to promotion rivals Bury.

Tranmere Rovers needs YOU now more than ever as we look to finish the season strong and create more lifetime memories together!

The SWA have been instrumental to the team’s success and we are targeting another important three points as the race for promotion hots up!

We need your help to spread the word and let’s get behind the team as our journey continues together and achieve another famous and memorable season!

Manager Micky Mellon said: “It is a fantastic time and we’ve created so many memories, but we are always moving forward, and we will never settle for what we have.

“We are consistently striving to help Tranmere Rovers Football Club grow and improve. Our main priority is to enhance the experience for the supporters.

“The fans have been so important once again and we need their support as always! The impact they have on the team is huge and they have driven us through difficult periods and the players respond positively to them.

“The fans make us really proud to be involved with Tranmere Rovers Football Club and the level of support we receive is terrific. To have that level of support guaranteed is amazing but we also have to play our part. We will collectively work together to reach our goals. We need you to be a part of the journey.”

Goalkeeper Scott Davies, who has played every minute for the Club since our return to the EFL, echoed his manager’s thoughts. He said: “The SWA have been our 12th man throughout, both home and away and we need their support for the final run in. The lads really do appreciate the support.”

To purchase tickets PLEASE CLICK HERE to buy online now. You can also visit the Club Store, which is open Monday until 5pm and Tuesday, 9am right up until kick-off.