Tranmere Rovers return to Prenton Park for the final time this season on Friday night as they host Forest Green Rovers under the lights in the Sky Bet League Two Play-Off semi-final first-leg, kick-off 7:45pm.

Micky Mellon’s men concluded the regular campaign, their first back in the fourth tier, in sixth position on 73 points following on from last Saturday’s 3-1 final day defeat away at Crawley Town.

Mark Cooper’s Forest Green make the journey up to the Wirral having enjoyed a successful second term at EFL level after finishing up a point and a place above Tranmere.

The Gloucestershire outfit played out a goalless home draw with Exeter City at the New Lawn to bring the curtain down on their 46-game season.

The Green Devils’ season so far

Cooper’s side spent the majority of the season competing in and around the top seven positions in Sky Bet League Two, securing a Play-Off position for the first time in the EFL back in April.

Tasting defeat just once in their final six outings – a 4-3 away defeat at Crewe Alexandra - to finish in their highest-ever placing within the English football pyramid, the Green Devils will be aiming to cap off a memorable year under the Wembley arch.

Spearheaded by the 14 goals of top scorer Christian Doidge, the forward returned to the New Lawn in January after a move to Bolton Wanderers collapsed following a loan deal in the North West.

The Newport-native began his senior career in Welsh football with Cwmbran Celtic, Croesyceiliog, Barry Town and Carmarthen Town before signing for Dagenham and Redbridge in 2014, where he spent two seasons.

Doidge moved to Forest Green in June 2016, scoring 25 goals as the club earned promotion to the Football League.

The 26-year-old netted 20 goals for Rovers in 2017/18, which saw him switch to Bolton Wanderers on loan with view to a permanent transfer, though he was recalled in January and his goals have since propelled his side in to a Play-Off finish.

We need you to Pack the Park as TRFC embark on their third Play-Off campaign in the space of three seasons.

So, if you want to watch some live, affordable football on the Wirral, come on down to Prenton Park this Friday and get behind Micky and the lads.

Tickets start from as little as just £2 for U12s and adults from £18 with family tickets available to save money. It is £2 cheaper to buy online, which we encourage all supporters to do.

Help us Pack the Park against Bury by joining the SWA and buying your match tickets today for a cheaper rate than on the day!

Can’t make it to TRFC’s Sky Bet League Two Play-Off semi-final first-leg with Forest Green Rovers on Friday night? Don’t worry as you can keep up with goings on at Prenton Park.

Banks’ long-range opener gave Tranmere the lead midway through the first half after Forest Green defender Gavin Gunning was sent off for an off the ball incident on Jay Harris.

Forest Green were reduced to 10 men after 15 minutes of the game played after referee John Busby showed Gunning a straight red card.

And TRFC took full advantage of their numerical advantage with 26 minutes on the clock, as Banks opened the scoring in style.

He received a pass from Kieron Morris before arrowing a right-footed dipping drive from 25-yards which beat Ward to crash off the underside of the crossbar and over the line.

Buoyed by their lead, Rovers went close again, with Ward pushing Norwood’s effort from 10-yards away for a corner.

Up the other end, Forest Green forward Christian Doidge could only drag his snapshot wide of Scott Davies’ goal when under pressure as Mark Cooper’s Green Devils pressed for a leveller on the Wirral.

In the closing stages of the half, forward Norwood had two opportunities which were both supplied to him down the right by full-back Jake Caprice.

Firstly, a teasing ball to the back-post saw Norwood get beyond his marker, throwing himself at the ball before poking his shot just wide before clipping a left-footed attempt over the crossbar.

Shortly after the break, defender Manny Monthe came to TRFC’s rescue, performing a perfectly-timed tackle on Doidge in the penalty area after the Welshman had raced through on goal with only keeper Davies to beat.

Norwood later glanced Liam Ridehalgh’s floated cross from the left just past the post with Tranmere pushing for a second goal in front of a packed-out Kop end of Prenton Park.

Caprice was next to try his luck, reacting smartly to a short corner from the right, the Londoner fizzed his low drive along the turf which was pushed away by Ward before being cleared.

Ward again was on hand to keep his team in the contest, saving from Norwood’s downwards header.

Forest Green then had a claim for a penalty waved away by referee Busby after substitute George Williams was brought down by Ridehalgh in the penalty area.

Reece Brown later spurned a great opening to equalise for the Gloucestershire outfit but he could only shoot low wide.

Tranmere could have had their second deep in to the second-half, though Norwood’s half-volley in the area was well-held by Ward.

TRFC secured the win in front of the SWA, and with it, the advantage going in to Monday’s second-leg at the New Lawn, kick-off 7:45pm.

Please note that it is reserved seating in all areas of the ground for tomorrow's fixture at Prenton Park.

If you pay cash on the turnstile, you will be given a ticket with a seat allocated to it.

Tickets will increase by £2 if you pay on the gate so we advise all suporters to buy online. Tickets can be purchased here 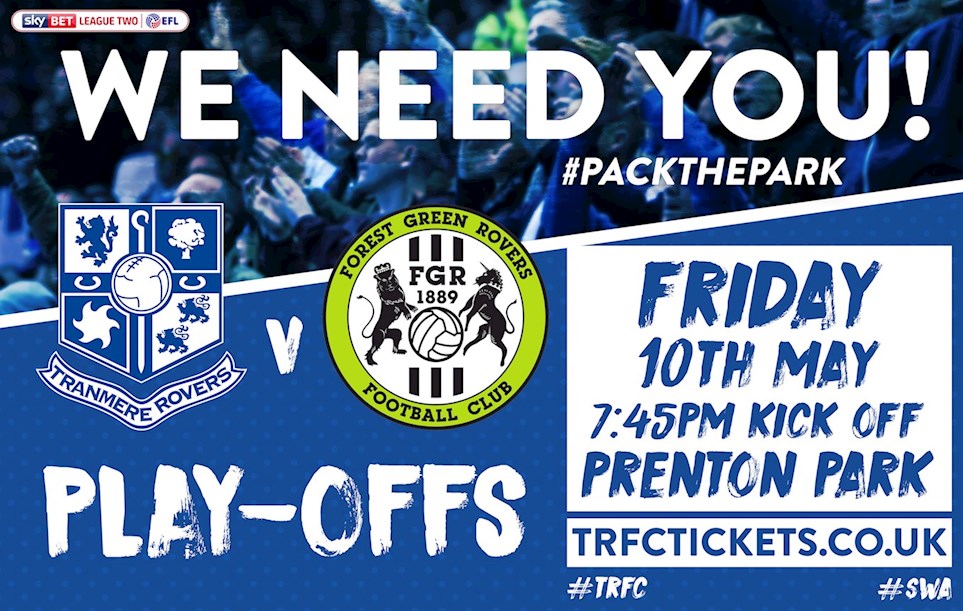 #PackThePark for the Play-Offs - TRFC vs Forest Green