Micky Mellon’s men are at this stage of the competition and face a top-flight club for the second season in a row, having beaten Wycombe Wanderers and Chichester City to set up a meeting with Nigel Pearson’s Hornets.

Watford have collected ten points from their four outings under the recently appointed Pearson and they kick-off their cup journey after finishing runners-up to Manchester City in 2018/19.

Centre-back Peter Clarke is available to make his Rovers debut away at Watford after he signed from Fleetwood Town on New Year’s Day.

Liam Ridehalgh and Manny Monthe are doubtful following injuries picked up during the Festive period.

Deulofeu progressed through Barcelona’s youth set-up and would go on to turn professional at the Nou Camp.

He played much of his early football for the club’s ‘B team’ but did go onto make senior appearances for the first-team during his stay with the Catalan giants.

Deulofeu later spent loan time in England with Everton (2013/14) before returning to Spain with Seville for 2014/15.

He signed permanently for Everton in a £4m deal in July 2015, featuring on 37 occasions for the Toffees.

A temporary switch to AC Milan followed prior to a move back to Barcelona in June 2017, where he won La Liga.

The Spain international, 25, signed for Watford on loan in January 2018 and moved permanently for £13m that summer.

The SWA have sold out their initial allocation of 2, 200, and a further 889 tickets will be available to purchase which will be on sale when we have them.

There are 30 spaces for wheelchairs and 20 easy-access / amenity seats for visiting supporters.

Official club coach travel will depart Prenton Park at 8am.

TRFC Radio will bring you every kick of the action with an iFollow audio match pass, which is the perfect place to follow the updates if you are not making the journey down to Hertfordshire, costing just £2.50.

Your matchday commentary team of Phill Wilkinson, Rob Edwards and Adam Siddorn will guide you through events at Vicarage Road.

Rovers will play Watford at Vicarage Road for the first time since April 2001 on Saturday, which ended in a 1-1 draw when both teams competed in Division One. 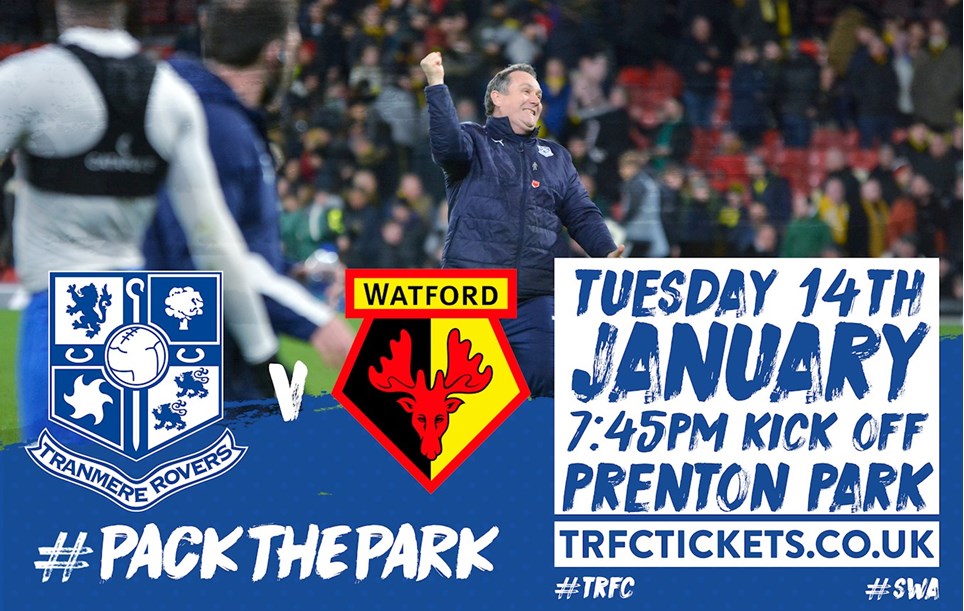 Tranmere Rovers staged a phenomenal second-half comeback from 3-0 down to earn a 3-3 draw away to Premier League club Watford in the Emirates FA Cup third-round at Vicarage Road on Saturday afternoon.

TRFC were two behind early on through strikes from Tom Dele-Bashiru and Nathanial Chalobah before Roberto Pereyra added a third just after the half-hour.

But then came a comeback after the break that epitomised Rovers’ never say die attitude, which means Tranmere will welcome Watford to the Wirral later this month.

Connor Jennings headed in for Rovers from close-range after the hour, which was initially ruled out for offside before being overturned by VAR before Manny Monthe turned in a free-kick.

VAR intervened for Rovers’ equaliser with three minutes to play when substitute Paul Mullin struck a penalty following a foul on Corey Blackett-Taylor.

Watford were reduced to ten men in the closing stages when Pereyra was dismissed.

New signing Peter Clarke made his debut for Micky Mellon’s men, while Monthe returned from injury. There was also a start up front for Stefan Payne.

Rovers kept their top-flight opponents at bay for 11 minutes when Dele-Bashiru drove a powerful effort right-footed from the edge of the penalty area which beat Aaron Chapman to find the top left corner.

Watford scored their second of the tie three minutes later, when Chalobah profited from a defensive mix-up to fire past Chapman into the left corner.

Up the other end, Kieron Morris sent a cross in which just evaded the head of Payne.

Nigel Pearson’s Hornets made it three on 33 minutes, with Argentina international Pereyra latching onto Andre Gray’s pass to curl left-footed across goal from the right-side of the box beyond Chapman.

Clarke and Monthe then both saw headers from set-pieces go narrowly wide of the post for Rovers.

Jennings bent an effort from 20-yards which forced goalkeeper Daniel Bachmann to drop down to his left and was equal to it.

Rovers made two half-time substitutions with Blackett-Taylor coming on for Payne and Calum Woods replacing Nelson.

Watford went in search of a fourth, when Joao Pedro cut inside after being threaded through by Isaac Success, and his low daisycutter went narrowly wide of Chapman’s left-post.

Tranmere would go onto enjoy some attacking pressure as the contest, as Jake Caprice sent a dangerous free-kick which just missed a white shirt.

Morris’ rasping strike from the edge of the box also made Bachmann turn behind for a corner.

Rovers pulled one back after 64 minutes when Jennings glanced past Bachmann following Blackett-Taylor’s cross from the right.

His goal was chalked off for an offside, with referee Graham Scott checking VAR and giving the goal.

Buoyed by their first goal, Tranmere were unlucky not to add a second when Jennings’ hooked shot was pushed over well by Bachmann.

Rovers were back in it on 77 minutes after Blackett-Taylor’s free-kick from the right wasn’t dealt with by Bachmann, allowing centre-back Monthe to shoot left-footed from close-range, in front of over 2,500 of the SWA.

Tranmere equalised when they were awarded a penalty through VAR, with Blackett-Taylor brought down in area on 87 minutes.

Up-stepped Mullin to convert the spot-kick from 12-yards, thumping right-footed straight down the middle past Bachmann to send the SWA wild.

Pereyra was sent off for the hosts by Scott in the 89th minute for a bad foul, as Rovers resiliently saw out the added time to secure a replay at Prenton Park in dramatic circumstances.

After tremendous support from the SWA, we have sold out of our initial allocation of 2200. A further 889 tickets are being sent to us and will go on sale as soon as we have them.

There are 30 spaces for wheelchairs and 20 easy-access / amenity seats for visiting supporters.

Official club coach travel will also be available for this fixture and will depart Prenton Park at 8am.

Tickets will be available to buy in TRFC Store and online here from the 16th December.