Setting the scene…
Friday night football is back at Prenton Park as Tranmere Rovers welcome Southend United to the Wirral in Sky Bet League One, kick-off 7:45pm.
Rovers earned their first away victory back in the third-tier last Sunday, after Corey Blackett-Taylor struck a late winner against Coventry City at St Andrew’s Trillion Trophy Stadium.
The result in Birmingham moved Micky Mellon’s men up to 18th in the standings on 12 points.
Southend travel up to Merseyside currently 22nd in the division having lost four of their last five games, collecting four points from 12 outings.
Team News:
Connor Jennings is available for selection having served his one-match suspension in the win away to Coventry City.
Midfielder Neil Danns has returned from international duty with Guyana and can also be selected.
Ollie Banks, Calum Woods, Jacob Maddox, Evan Gumbs, Mark Ellis and Ishmael Miller all remain out of action.
David Perkins and Morgan Ferrier are close to return following injuries, while Paul Mullin was forced off just after half an hour against Coventry.
One to Watch
Forward Stephen Humphrys leads the way in Southend’s goal scoring charts this season with five.
Oldham-born Humphrys turned professional with Fulham in 2013, coming through the youth system at Craven Cottage in 2016, making two Sky Bet Championship appearances.
Loans followed to Shrewsbury Town, Rochdale and Scunthorpe United, before Humphrys signed permanently for Southend in January 2019.
The 22-year-old struck a late winner against Sunderland on the final day of last term to keep the Essex side in Sky Bet League One.
And he leads the Shrimpers’ tally this campaign, with braces against Wycombe Wanderers and Fleetwood Town.
Match Officials
Referee: David Webb
Assistant Referees: Robert Merchant and Mark Jones
Fourth Official: Lewis Smith
Tickets
We are calling on the SWA to Pack the Park for some Friday night football action!
Affordable football returns to the Wirral as TRFC welcome the Shrimpers in Sky Bet League One, so come on down and back the lads as we continue our journey in the division.
Tickets for the SWA are on sale and start from the below prices:
Adult: £19
Senior (65+): £12
Young Persons (18-22): £12
U18s: £6
U12s accompanied: £2
Tickets for TRFC vs Southend United under the floodlights on Friday night can be purchased by CLICKING HERE.
Past Meetings
Tranmere Rovers have won 21, drawn 14 and lost 15 in total versus Southend United.
Match Coverage
Can’t make Friday night’s Sky Bet League One fixture against Southend United at Prenton Park? Don’t worry as iFollow has got you covered!
TRFC Radio’s commentary team of Phil Wilkinson, Rob Edwards and Adam Siddorn will bring you all the updates.
UK-based iFollow subscribers can access a live stream of the game for just £10, which is great value!
An Audio Match Pass of £2.50 can also be purchased which will give the SWA uninterrupted coverage of the match.
Subscribers will still need to purchase a Match Pass if they want to watch all of the action.
iFollow is the official streaming service of Tranmere Rovers Football Club, allowing the SWA to see live streaming of matches, audio match commentary and behind the scenes content while you can get closer to the Club by watching on any device and in any location around the globe.
To sign-up for a Match Pass to watch TRFC vs Southend United on Friday night, please CLICK HERE.
Alternatively, you can follow the action through our social media channels below, with full text coverage during the fixture, followed by a match report.
Twitter: @TranmereRovers
Facebook: @trfcofficial
Instagram: @tranmererovers
Did you know?
Rovers’ last victory over Southend United came back in November 2009, as Ian Goodison and Terry Gornell were on target in a 2-0 triumph at Prenton Park. 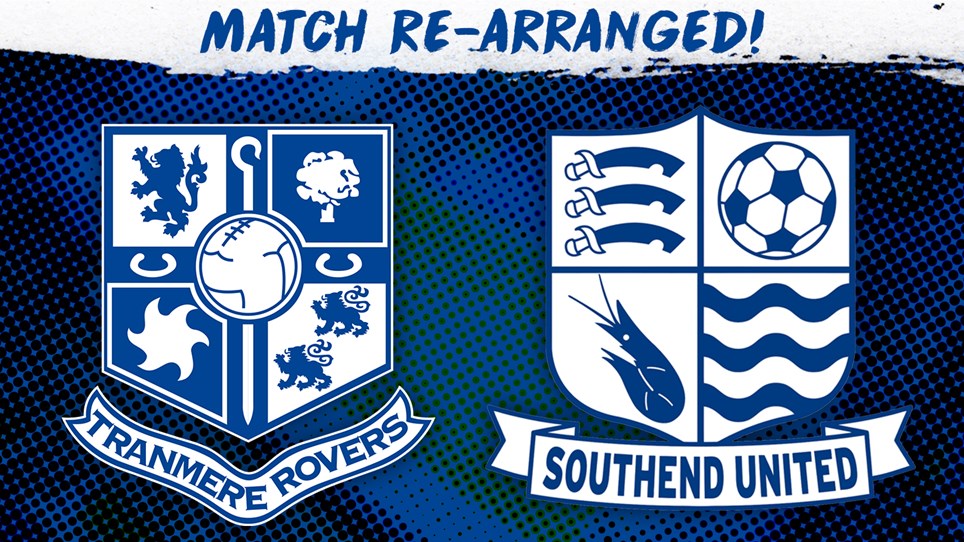 Paul Mullin’s late penalty secured a point for Tranmere Rovers in a 1-1 draw against Southend United at Prenton Park on Friday night.

Tom Hopper’s early opener had Southend ahead at the half-time interval, but Mullin’s late spot-kick ensured Rovers earned a point.

Manager Micky Mellon made three changes to the starting XI that won 1-0 away to Coventry City on Sunday, with David Perkins and Neil Danns returning to the squad, while there was a start for Rushian Hepburn-Murphy.

With the game three minutes old, Simon Cox struck a 25-yard volley which failed to find the target, as the visitors created the first chance.

On the half-hour mark, Timothee Dieng wasted a great opportunity for the Shrimpers, heading wide after a corner was glanced back into his path by Mark Milligan.

Rovers almost found themselves two behind five minutes later, when Davies dropped the ball on the edge of his penalty box, with Cox’s resulting lobbed effort going over the crossbar and landing on the roof of the net.

Up the other end, Tranmere had openings at goal towards the end of play.

Firstly, midfielder Perkins dragged a low left-footed shot wide from 10-yards out after the ball had dropped to him.

After the break, Rovers threatened in front of the Argyle Satellite Taxis Kop when Liam Ridehalgh’s free-kick from the left, which found Danns, who set up Morris, but the midfielder’s goal-bound effort through a sea of players was cleared to safety.

Davies then had to push Isaac Hutchinson’s right-footed rising attempt from outside the box over the crossbar following a fast breakaway, as Gary Waddock’s Essex outfit pushed for a second on their travels.

Rovers nearly levelled in bizarre circumstances nine minutes into the second-half, when Stefan Payne chased down Bishop’s kick, with the ball ricocheting off the forward and narrowly missed.

Connor Jennings and Mullin were introduced, with the pair replacing Hepburn-Murphy and Blackett-Taylor, as Rovers pushed for a way back into the contest.

In the final 20 minutes of action, centre-back George Ray was agonizingly close to pulling Mellon’s men level, but Rovers’ number five was denied from a sprawling stop by Bishop on the line.

Rovers continued to pile on the pressure, with Danns seeing a right-footed shot from the left-side of the box turned behind for a corner.

And Tranmere’s endeavour saw them level on 84 minutes from the penalty spot after Mullin was dragged down in the area by Nathan Ralph, as referee David Webb pointed to the spot.

Following a delay, Mullin stepped up to thump the ball right-footed straight down the middle past Bishop.

Rovers almost won it in the closing stages, but Jennings’ curled attempt was blocked, with a battling point being gained.

Next up for Tranmere in Sky Bet League One is a trip to the Stadium of Light to play Sunderland on Tuesday night, 7:45pm kick-off.

Tranmere Rovers are back at Prenton Park for a Friday night football clash under the floodlights when they host Southend United, 7:45pm kick-off, and we want the SWA to Pack the Park!

Micky Mellon’s men will aim for a second straight win after Corey Blackett-Taylor struck the only goal in a 1-0 win away against Coventry City on Sunday.

And affordable football returns to the Wirral as TRFC welcome the Shrimpers in Sky Bet League One, so come on down and back the lads as we continue our journey in the division.

It is a Friday night, there is no school on, so why not visit Wirral’s Family Club to watch some football and cheer on Rovers.

A Prenton Park tradition, Friday night football returns for the first time this season, and we know that we can count on the SWA to come out in force.

Ollie Banks’ stunning strike won it for Tranmere that night, with over 9,000 of the SWA packed in and supporting the team.

The SWA are the 12th man and have played an important role from the stands so far this term and Rovers need the support as we look to build on last weekend’s three-points.

And manager Mellon has said how important the SWA are to the players and the coaching staff.

Mellon said: “The fans stick with us all of the time, and they know what the job is and what we’re trying to do, and that is make a group of players who are playing at this level for the first time, be able to be consistently take part.

“We are consistently striving to help Tranmere Rovers Football Club grow and improve. Our main priority is to enhance the experience for the supporters.

“As a Club, we want to deliver for the people of the Wirral to try and give them a Football Club to be proud of who can go toe-to-toe under the lights.”

Tickets for the SWA are on sale and start from the below prices:

Tickets for TRFC vs Southend United under the floodlights on Friday night can be purchased by CLICKING HERE.