A first half goal from Danny Lloyd sealed an important three points for Tranmere Rovers at Bradford City.

The winger struck right at the end of the half, and Rovers comfortably saw out the remainder of the match, to seal the point, and the emotion shown at full time how much the result meant to the entire squad.

Tranmere made one change from the draw vs Salford, with Jay Spearing returning, replacing Otis Khan.

James Vaughan was absent from the matchday squad, with Charlie Jolley promoted to the subs bench.

Bradford had a great chance to take the lead with eight minutes on the clock as Ollie Crankshaw got the right side of Peter Clarke, but his bending effort was over the crossbar.

A quick counter attack from Rovers created their first opportunity of the match, as Danny Lloyd played a pass to the left for Keiron Morris, who cut inside to strike over the cross bar from 25-yards.

A long-distance effort from Connor Wood in the 25th minute, which deflected wide for a corner, was the next chance for the Bantams.

There was a great battle occurring in the Tranmere half between skipper, Peter Clarke, and former Rovers man Andy Cook.

Another counter attack from Rovers resulted in a goal just before the half time whistle, as Joe Murphy’s quick thinking threw the ball out to the left for Lloyd, who drove forward with real intent and his cross was too much to handle for Sam Hornby who parried into his own net to give TRFC the lead.

The counter attack was proving a real weapon for Rovers at the Utilita Stadium, and an excellent outside of the boot pass by Liam Feeney picked out Morris, who cut inside to shoot, but his effort deflected wide for a corner.

In the 59th minute, Lloyd, who was on a booking, made way for Otis Khan, who took over on the left wing for the visitors.

Tranmere had a glorious chance to make it 2-0 as a free-kick by Feeney was headed goal bound by Lewis, and Clarke was on the follow up to side foot over.

An incredible piece of defending from Tranmere, twice inside a minute, as a strong tackle by Spearing inside the penalty area denied a certain goal, and moments after, Clarke powered above Cook to head over the crossbar for a corner.

In the 88th minute, Feeney was replaced for Liam Ridehalgh, and our longest serving player was celebrating his 30th birthday.

In the last minute, Woolery raced through on goal, holding off the attention of two Bradford defenders, but his effort went over the cross bar.

Rovers' game management throughout the entire second half was excellent, and the emotion shown at full time showed how much the three points meant, as TRFC returned to winning ways.

Our next game is on Saturday at home to Barrow, kick-off, 3pm, and will be available to watch live on iFollow by CLICKING HERE. 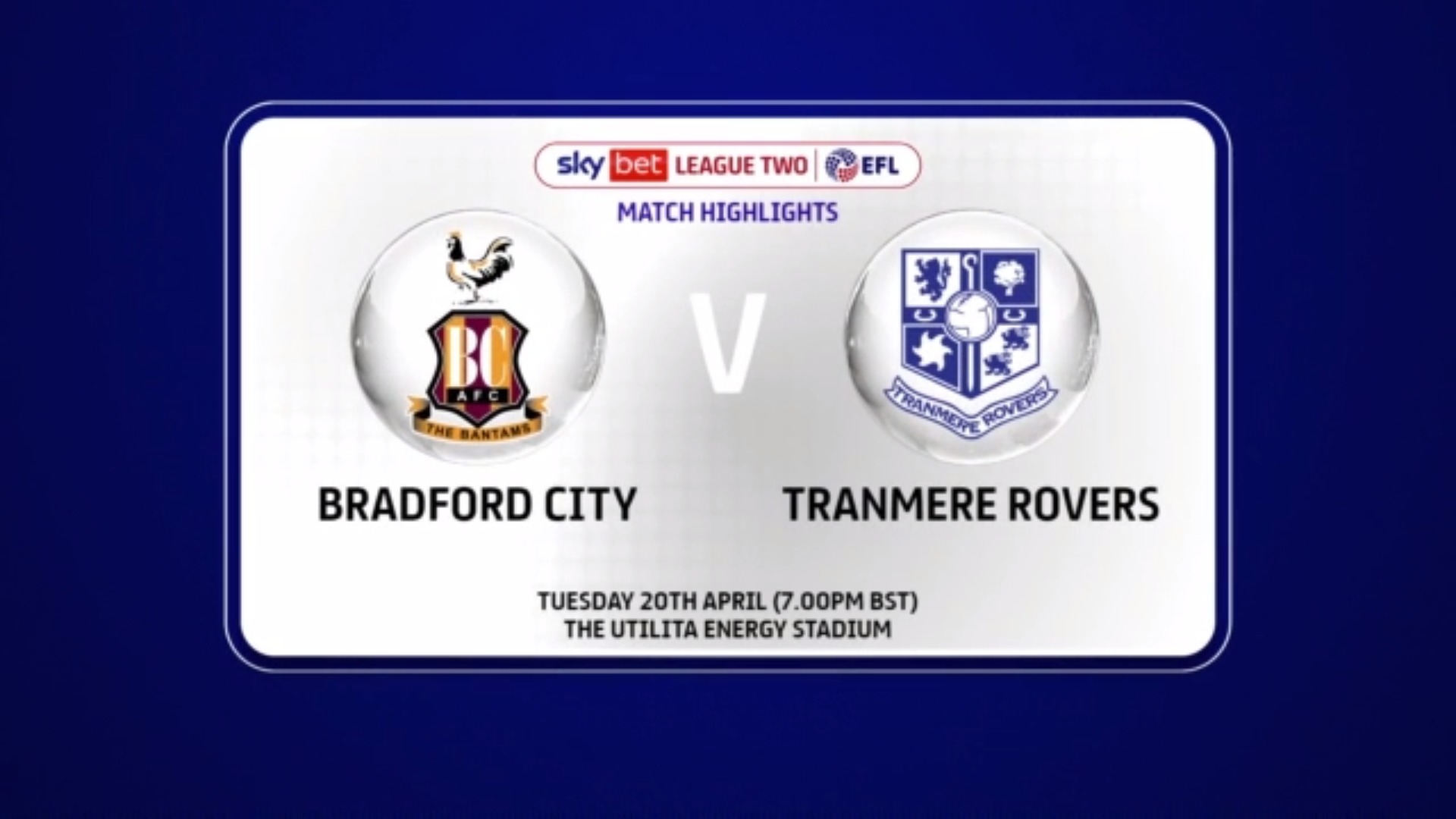 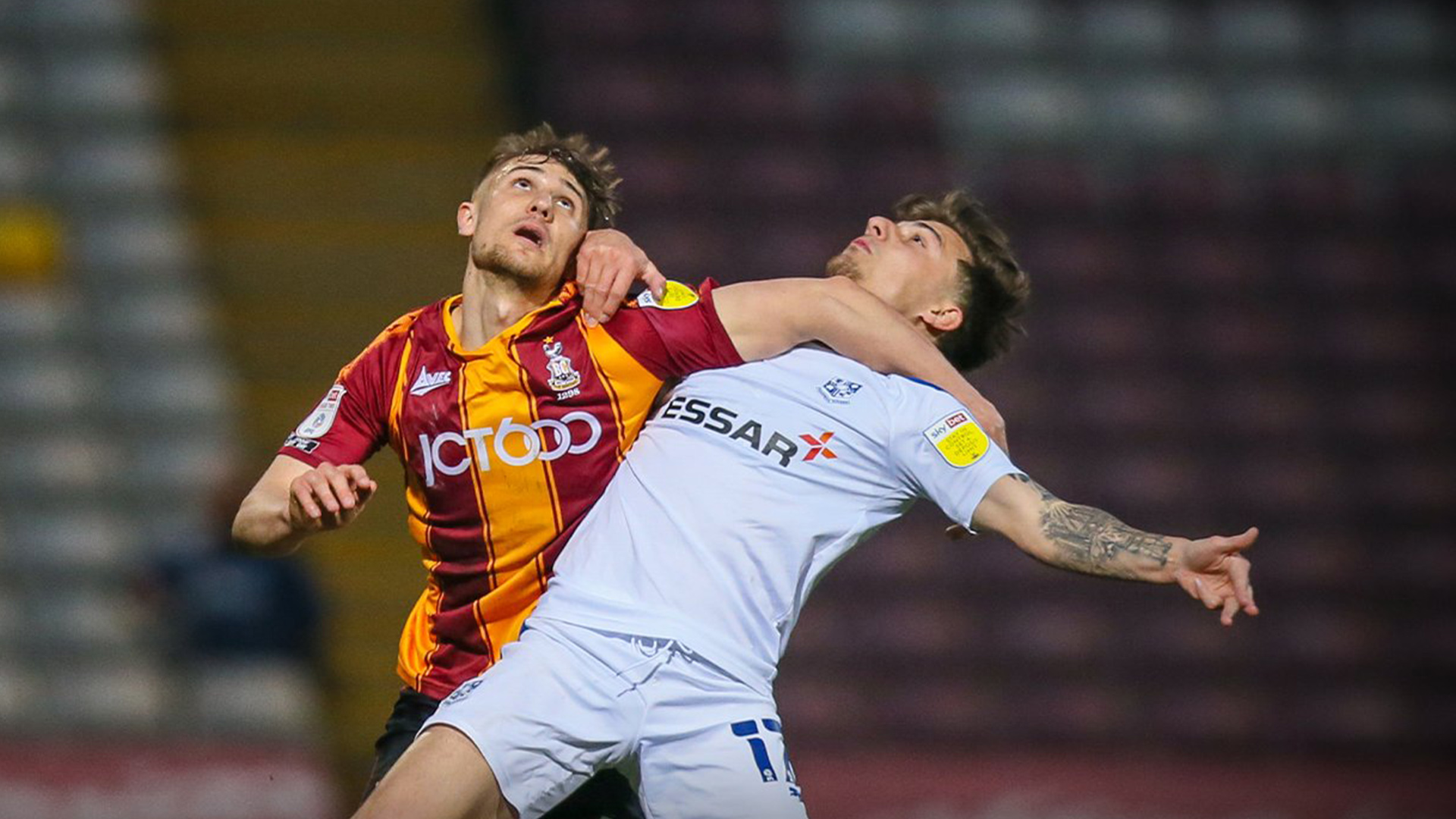