Rovers head into the game looking to bounce back in the league after a first defeat in eight games last Saturday to Walsall however they did pick up a Papa John’s Trophy victory in midweek against Man City U21s.

Keith Hill reported no new injury problems and a fully fit squad to choose from with the exception of Stefan Payne.

The 23 year old has been a constant threat for Exeter in the last couple of seasons and his versatility has seen him play as both a winger and a wing back.

Starting his career at Crystal Palace and then Watford, Williams got his first taste of league football with two loan spells at Wycombe Wanderers. However, it was with the Grecians that he first found his form having joined them in 2019.

Last season was a real purple patch for the wide man as he played 46 games, assisting 17 times and scoring five goals.

So far this season he has netted three times and his pace will provide an attacking option for Exeter no doubt on Saturday.

The TRFC radio team of Phill Wilkinson and Adam Siddorn will be in place at St. James to provide live updates on proceedings.

Please note season ticket holders only receive home games on iFollow automatically and have to pay for away fixtures.

Tranmere Rovers were on the wrong end of a 5-0 scoreline at the hands of Exeter City at St James Park in an afternoon to forget for the visitors.

Keith Hill drafted in Otis Khan and Kaiyne Woolery for the game, with Paul Lewis dropping to the bench and James Vaughan missing out through injury.

Corey Blackett-Taylor was named on the bench with Danny Lloyd making his second league start for the Club. Morgan Ferrier was also named as a substitute.

Very lively start at St James Park, with Scott Davies pulling off an important save in the first 60 seconds, and from the defensive clearance, Woolery broke through but his shot was deflected wide for a corner which Rovers couldn’t capitalise on.

Exeter found a way through on the right hand side and a deep cross picked out the run of Joel Randell who side footed over the bar.

The hosts went ahead through Ryan Bowman before the ten minute mark, as the frontman beat his marker to fire home from close range.

Exeter doubled their lead before the 20 minute mark as a Rovers player was alleged to have handled in the penalty area. Matt Jay stepped up and rolled the ball past Davies, leaving Rovers with a tough task ahead if they are to take anything back with them to Prenton Park.

Rovers went 3-0 behind in the 27th minute as Bowen grabbed his second of the contest with a calm side foot past Davies.

Looking for a way back into the game, an excellent cross from the left by Liam Feeney was met by Woolery but his header was off target.

Rovers made four changes at half time, with Liam Ridehalgh, Ferrier, Ollie Banks and Lewis coming on for Otis Khan, Lloyd, Keiron Morris and MacDonald coming off.

Tranmere knew they had a tough job on their hands to overturn the deficit, but the hosts were brimming with confidence in front of their own supporters.

With 23 minutes to go, Woolery was replaced by Blackett-Taylor in the last roll of the dice from the away side.

Tranmere’s best chance of the second half fell to Lewis who met a Feeney corner but the goalkeeper was equal to the effort, catching the ball.

Exeter added a fourth when Jake Taylor hit a low strike from the edge of the box past Davies. The score soon turned to five in the 77th minute as Bowman grabbed his hat trick to round off a match to forget for TRFC.

Our next match will be on Tuesday 15th December as we host Stevenage at Prenton Park, 7.45pm kick-off. The game will be available to watch live on iFollow for the cost of just £10, with full match commentary provided by Phill Wilkinson. CLICK HERE to subscribe 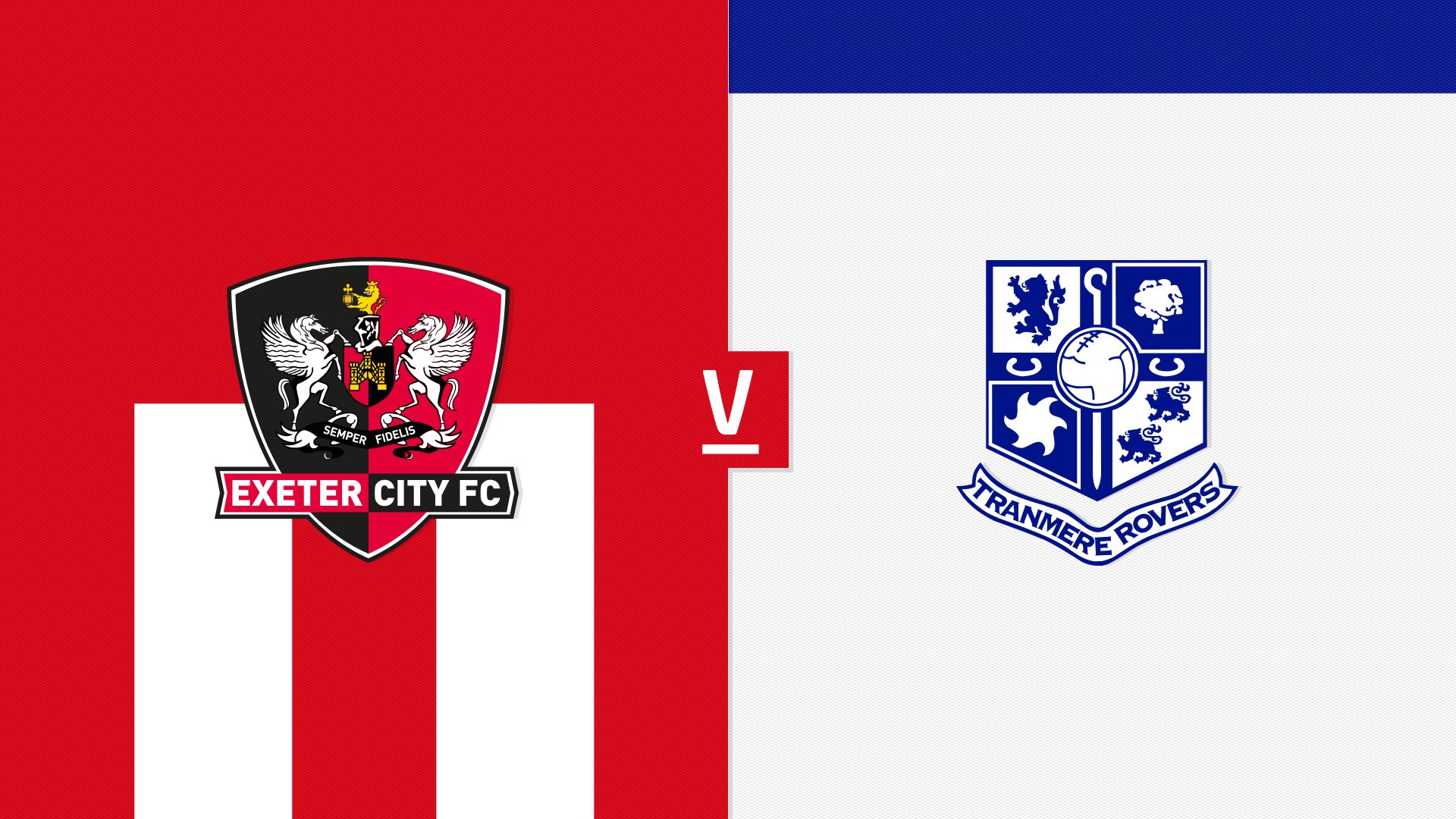 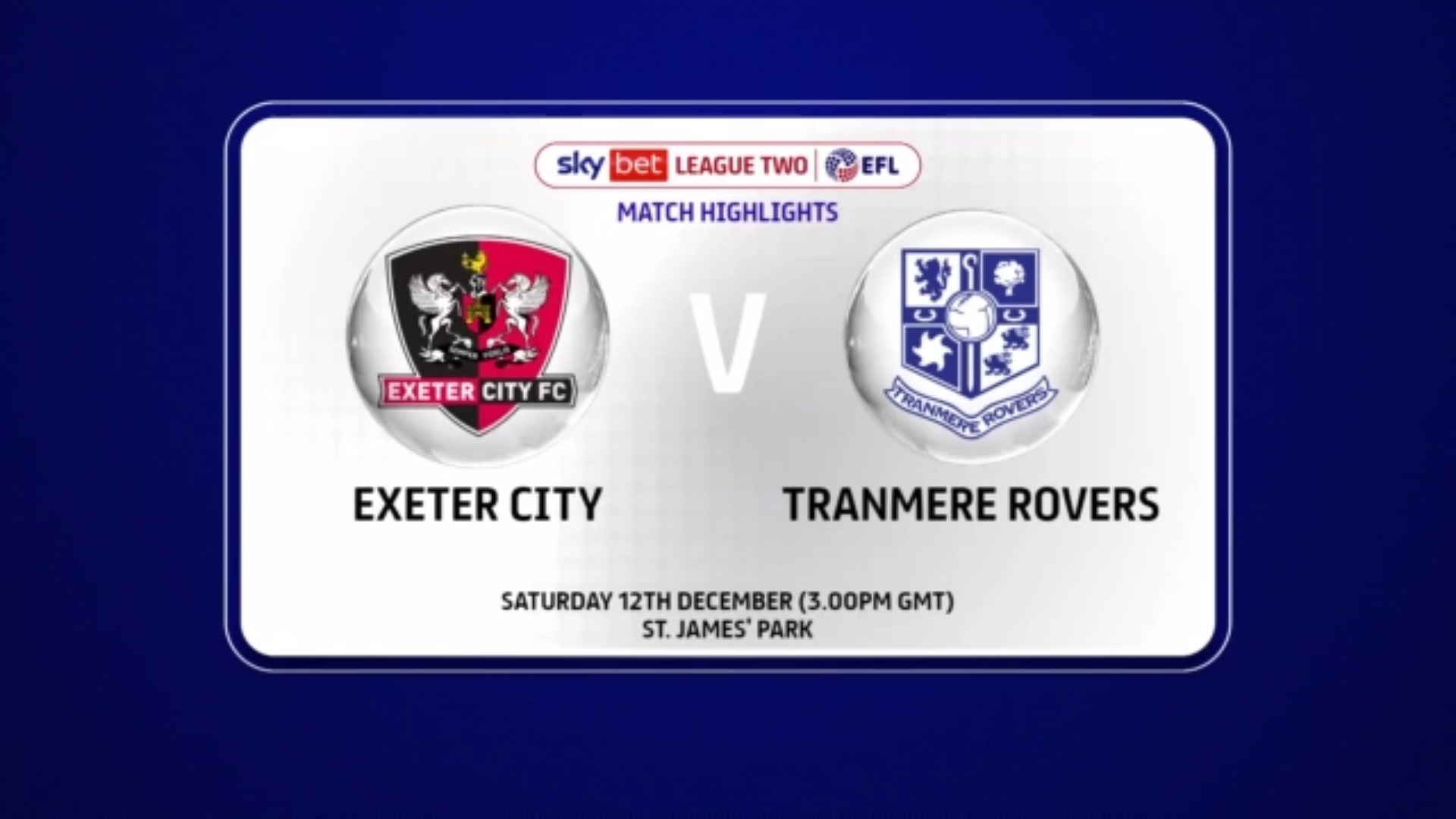 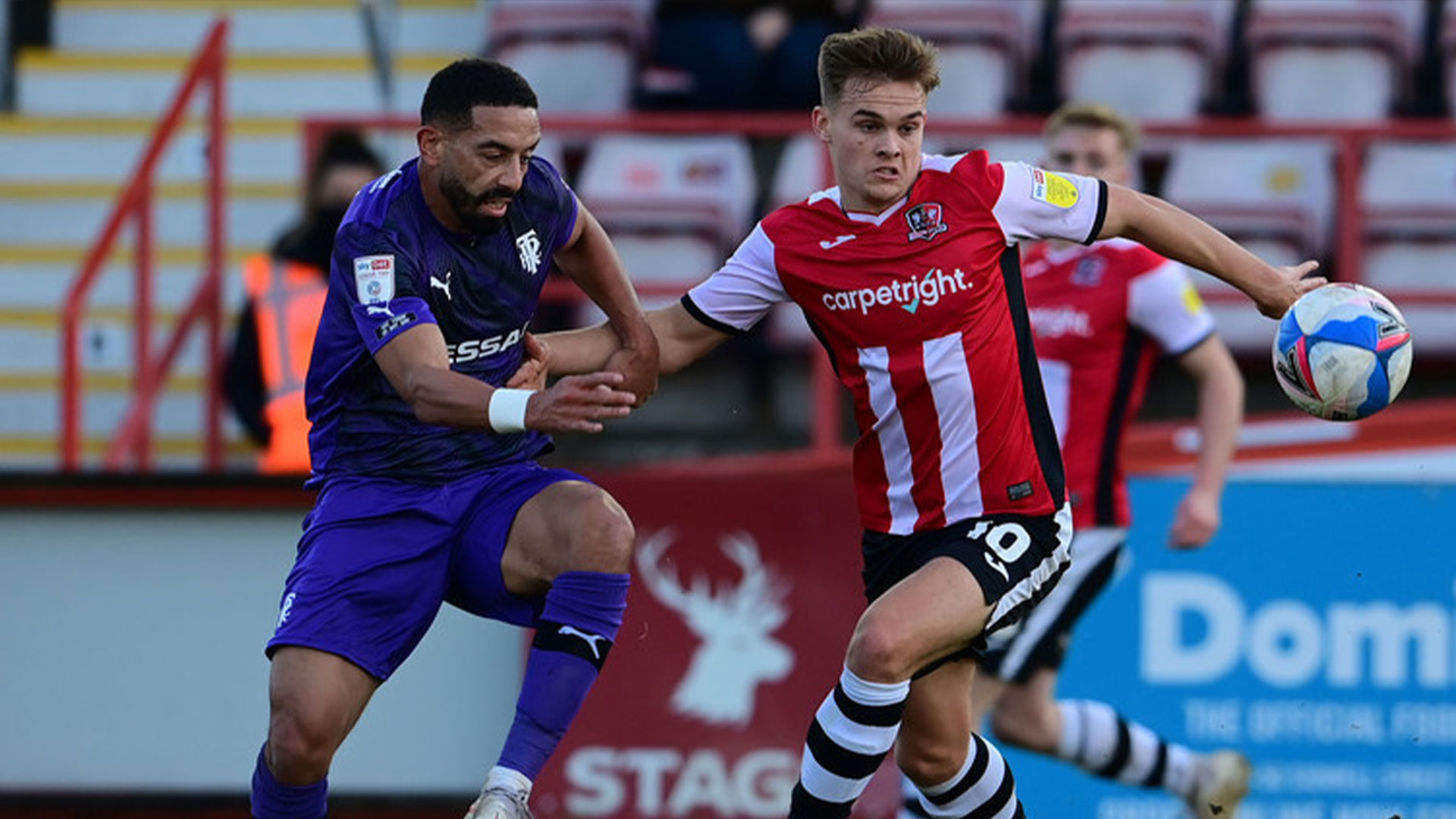