Tranmere Rovers turn their attention to the Papa John’s Trophy in the first knock out stage of the competition against Manchester City U21s at Prenton Park.

Supporters are able to attend this game, including none season ticket holders and tickets are on sale here.

Rovers advanced through the competition group stages following a penalty shoot out win against Wigan Athletic and ultimately, six points out of three games.

Manchester City U21s topped their group having won twice and drew once in their group.

James Vaughan limped off on Saturday and will be assessed ahead of this game and Stefan Payne still remains sidelined. Aside from that, Rovers have a fully fit squad to pick from.

Having already made his first team debut and scoring in it, Delap may be a name that rings a bell amongst football fans. Many will remember his Dad, Rory who gave many a team nightmares with his long throw.

Liam Delap’s first team Manchester City first team debut was a dream one, having scored in the 18th minute against AFC Bournemouth in the EFL Cup. Three days later, he made his Premier League debut against Leicester City, coming on as a substitute for Fernandinho.

An 87th minute penalty from Ollie Banks and a first goal for Danny Lloyd saw Rovers come back from one goal behind to seal a 2-1 victory against Manchester City U21s in the Papa John’s Trophy first knock out round.

City took the lead early in the first half through Liam Delap, who has featured for City in the Premier League, but Tranmere responded well with Lloyd hitting an exquisite finish by our number 35.

The visitors were reduced to ten men early in the second period with Luke Mbete given a straight red and Rovers sealed the win late on through Banks ahead of this weekend’s trip to Exeter City.

Tranmere made eight changes from last weekend’s match at home to Walsall, with Calum MacDonald, Paul Lewis and captain for the night, Manny Monthe, retaining their places.

Manchester City had the first chance of the evening when Morgan Rogers weaved his way past the TRFC defence but his shot was pushed away by Joe Murphy.

In the seventh minute, Sid Nelson, who stepped in for Peter Clarke, nearly replicated his team mate’s attributes in the opposition penalty area, by getting on the end of a Danny Lloyd corner to head just wide.

City went ahead just after the 15 minute mark as Delap turned home from close range unmarked, with Tranmere players calling for offside, but the decision wasn’t given.

A similar opportunity presented itself for the Citizens in the 23rd minute, when a cross from the right this side picked out an unmarked player, but this time their effort was knocked wide.

Rovers equalised in the 26th minute, as they hit City on the break, with a Sam Smith cross being chested down by Morgan Ferrier into the path of Lloyd, who smashed home from close range a lethal finish.

Doyle was proving why he was on the brink of the first team at the Ethiad Stadium, and he unleashed a ferocious shot from inside the penalty area which rattled back off the post, but it looked as if Murphy got a touch to it, and if so, a world class save.

At the other end, Lloyd was proving a real nuisance as he struck over the bar from outside the penalty area, and his direct runs were proving a concern for the young opposition midfield and defence.

Both sides began the second half with an urgency to get ahead but ten minutes in, the visitors were reduced to ten men as Mbete was sent off for lashing out at Paul Lewis in an off the ball incident.

City were still a threat moving forward, and they rattled the crossbar with a free-kick from James McAtee. After the ball bounced out of play, Rovers made their change as Kaiyne Woolery came off for Otis Khan in the 62nd minute.

In the 70th minute, Tranmere’s second change occurred as Ferrier came off for Keiron Morris.

The two subs linked up well as Morris thread the ball down the left for Khan, who cut inside and bended the ball towards the top left, only for goalkeeper Ciaran Slicker to parry away for a corner kick.

Tranmere were awarded a penalty with three minutes to go as Morris was tripped in the penalty box, and confidently, Banks stepped up to smash the ball beyond the goalkeeper.

Rovers had another late opportunity as a cross from the left just evaded Lloyd for his second, and at the other end, City fluffed a glorious opportunity right in front of Murphy’s goal with the keeper making the save from Delap and Harwood Bellis missing the follow up.

Despite City throwing bodies forward, Rovers held on to their lead to book the place in the next round of the competition, which will be drawn on Thursday at 11.30am.

Our next game is at Exeter City on Saturday 12th December, 3pm kick-off, and it will be live for our fans to watch on iFollow for the price of just £10. Please CLICK HERE to subscribe now. 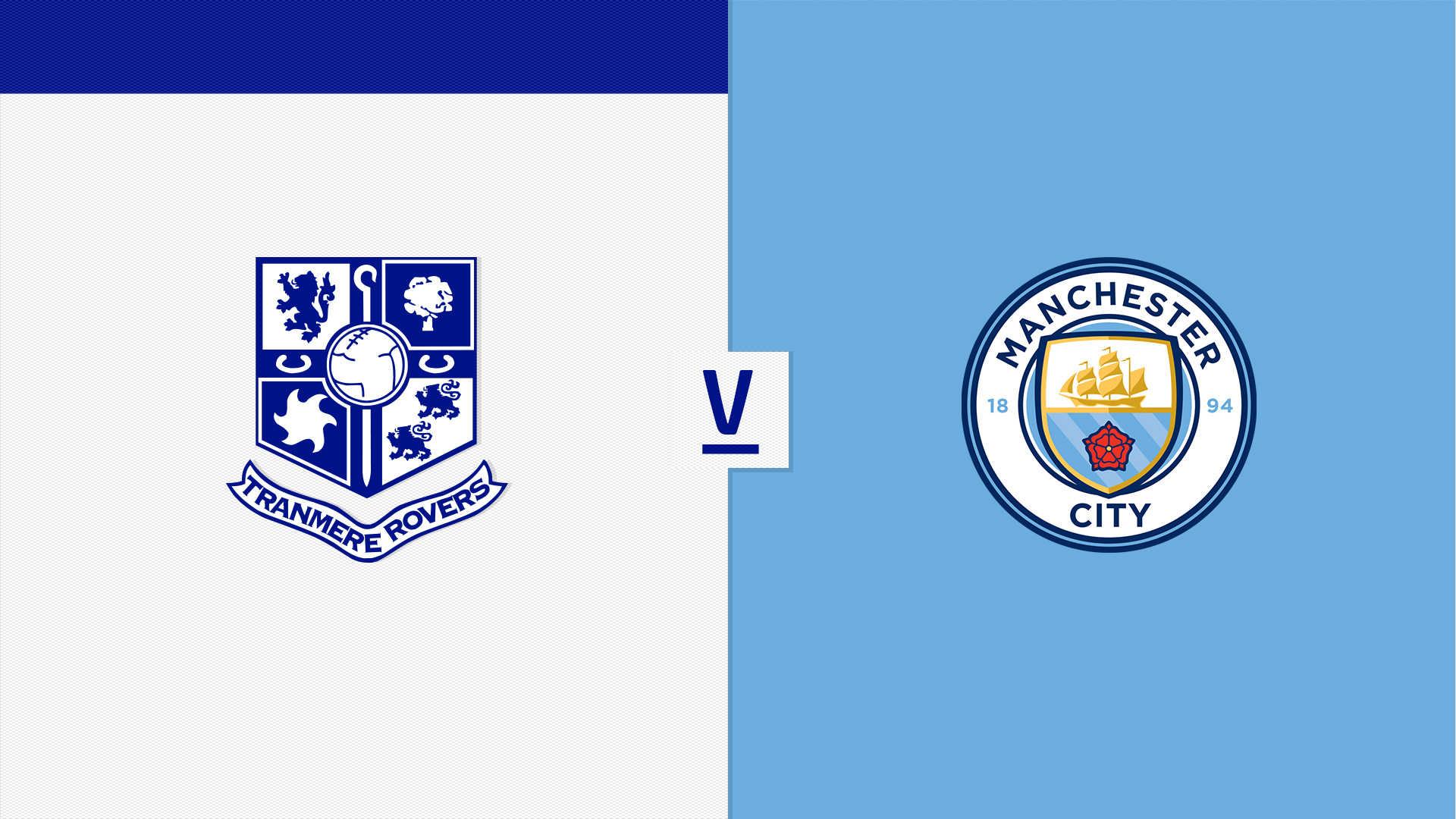 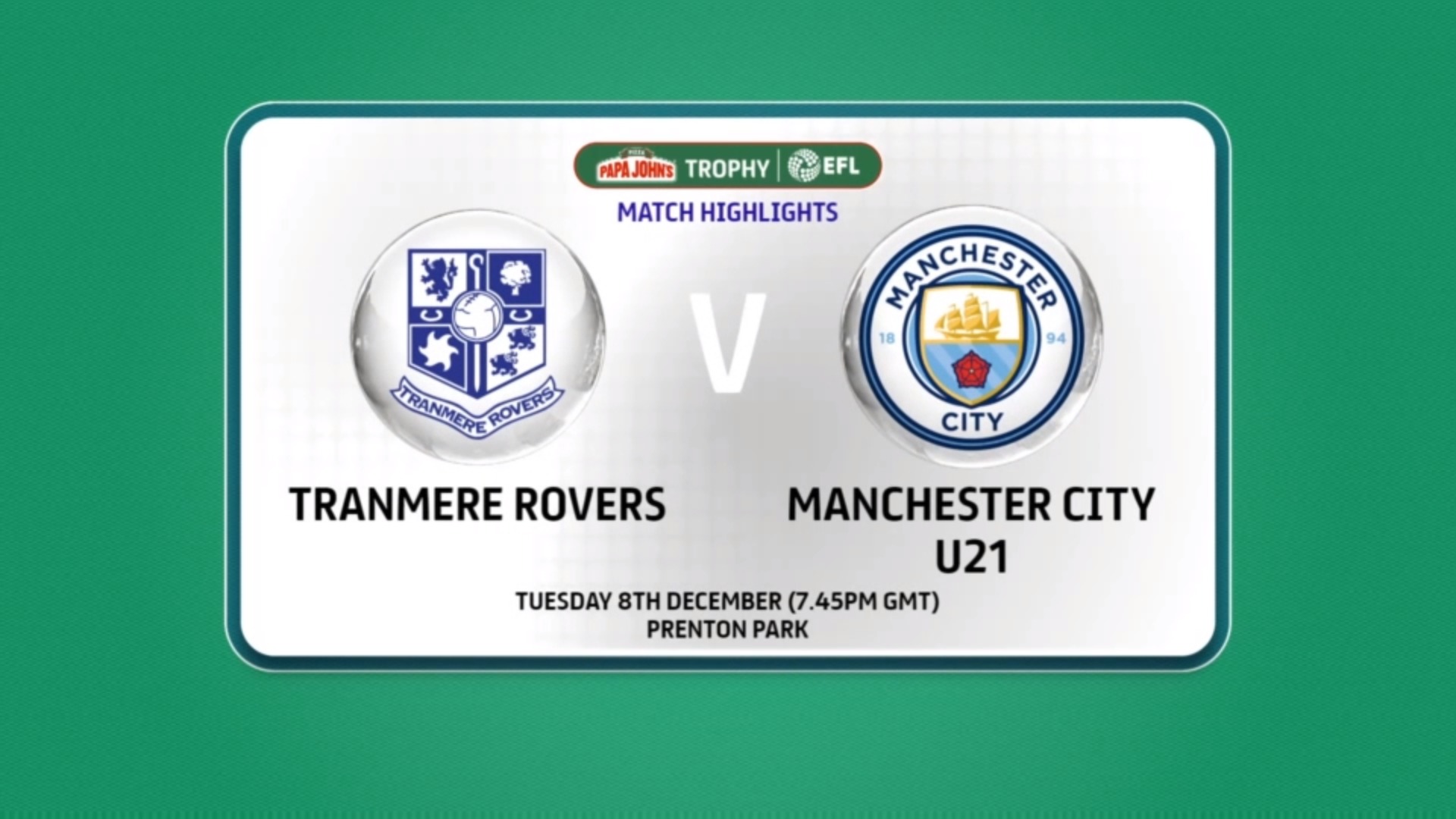 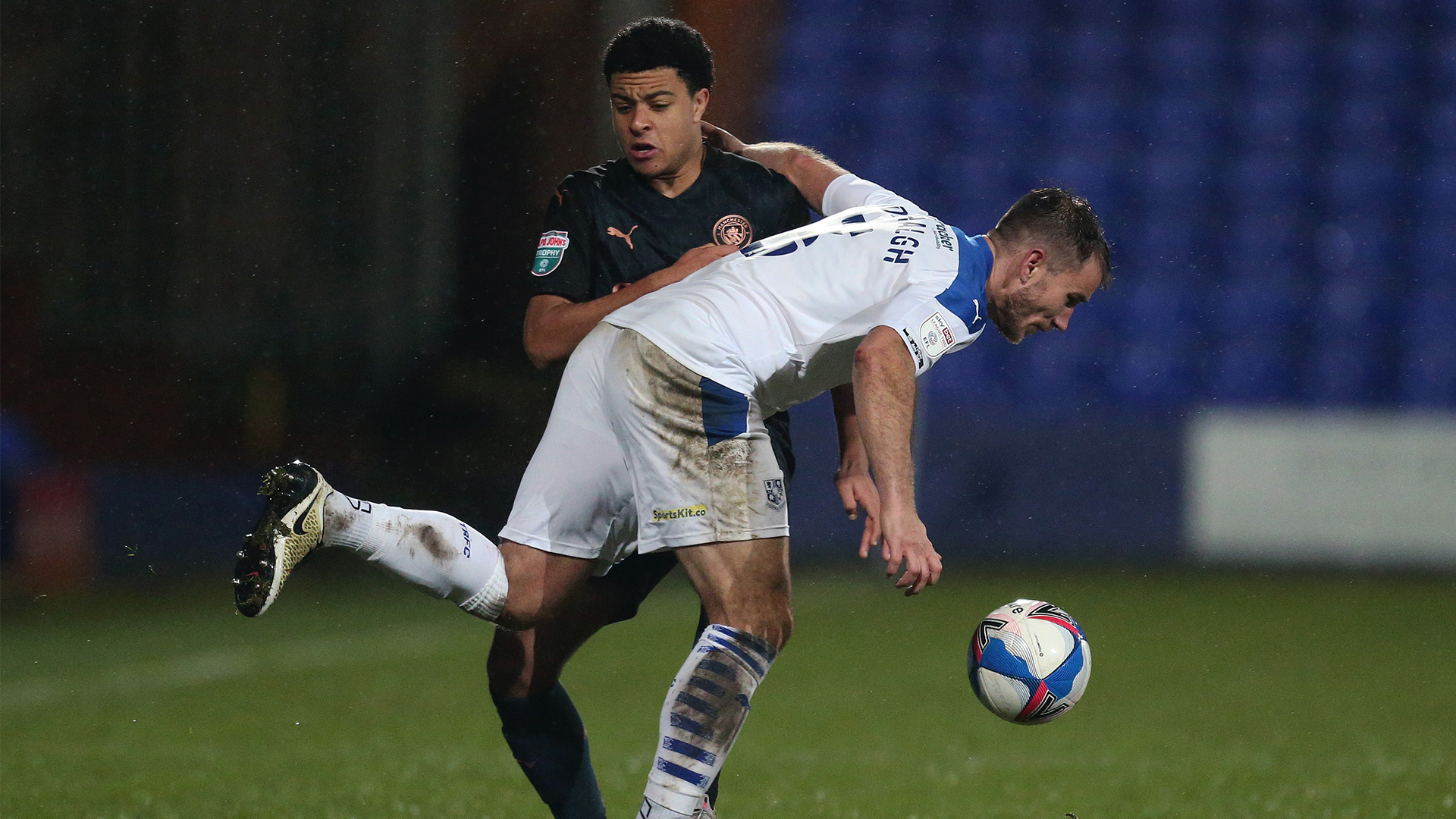