Tranmere Rovers will be looking to make it four consecutive wins in Sky Bet League Two when they go up against Crawley Town at Prenton Park this Saturday.

Rovers have enjoyed recent successes over Carlisle United, Leyton Orient and most recently Newport County. Keith Hill’s men sit just outside the automatic promotion positions on goal difference after four wins, one draw and one loss in their previous six outings.

Crawley Town, managed by John Yems, last played on Tuesday night with another long trip to Morecambe for a game which they lost 3-1. Their last six fixtures have resulted in two wins and four losses, leaving the Red Devils in 14th position in the division.

Otis Khan is still out of action with a hamstring strain whilst Kieth Hill gave the following update on James Vaughan.

“James is progressing, but he is feeling more comfortable and he will be assessed on a daily basis until the weekend.”

The 27 year old has experience of both League One and Two with Exeter City, Peterborough United and Bristol Rovers before signing for Crawley this summer

The forward recently netted in a 2-0 win over Exeter City and overall has scored 12 goals in all competitions for Crawley this season. With the departure of Max Watters in the January transfer window to Cardiff City, John Yems will be looking to his forward line of Nichols and Nadesan to add to their scoring tallies for the season,

The TRFC radio team of Phill Wilkinson and Adam Siddorn will be joined by Dave Higgins who will be in place at Prenton Park to provide live updates on proceedings.

Tranmere Rovers three match winning run in League Two came to an end with a 1-0 loss at home to Crawley Town.

The visitors scored midway through the second half to secure the point on a hugely frustrating afternoon for Keith Hill’s side.

Nye Kirby came into the starting line up, replacing the injured Kieron Morris in the only change from the win against Forest Green Rovers last weeked .

An early chance for the visitors, as Tranmere gave possession away inside their own half and Crawley captain George Francombe broke away, but his side foot turned into an easy collection for fellow skipper, Scott Davies.

Following the early scare, Tranmere settled into the contest at Prenton Park, and created a couple of goal scoring opportunities, the best, a Woolery strike over the cross bar.

Crawley were posing a threat as Ashley Nadesan nearly beat Davies in a 50/50, but luckily for Rovers, the ball was hacked clear.

In the 11th minute, both teams had glorious chances to take the lead. First, Woolery had a shot saved and David Nugent but the rebound over. At the other end, a dipping shot from Tom Nichols went just over the bar.

A great chest down and half volley from Kirby, 30 plus yards out, nearly caught the visiting goalkeeper off guard but he tipped over for a corner kick.

Both teams were seeing chances fall away as the search for the first goal went on in Prenton  with numerous dangerous set pieces and crosses entering both penalty boxes but the score remained 0-0 at the break.

A change at the break saw Danny Lloyd introduced off the bench for Kirby, with the Palace midfielder withdrawn.

There looked to be more width in Tranmere’s play with a change of approach to the match, Lloyd and Woolery operating the flanks.

The visitors took the lead in the 57th minute when a cross from the left was turned past Davies from close range.

A world class save from Davies prevent Crawley from doubling their lead, reacting to a half volley from inside the box, and from the follow up, the visitors hit the bar.

At the other end, Tranmere came close as Lewis had an effort blocked from inside the penalty area.

Ali Crawford and Corey Blackett-Taylor came on with 18 minutes to play, as O’Connor and Nugent were the men to make way.

A fantastic long ball from Monthe picked out Woolery on the left who cut inside to force a strong save from the goalkeeper as Tranmere looked for an equaliser at Prenton Park.

However, Tranmere could not find an equaliser and the visitors headed back down south with all three points in the bag.

Our next game will be on Tuesday at Southend, 7pm kick-off, and will be live on iFollow for just £10. Please CLICK HERE to subscribe. 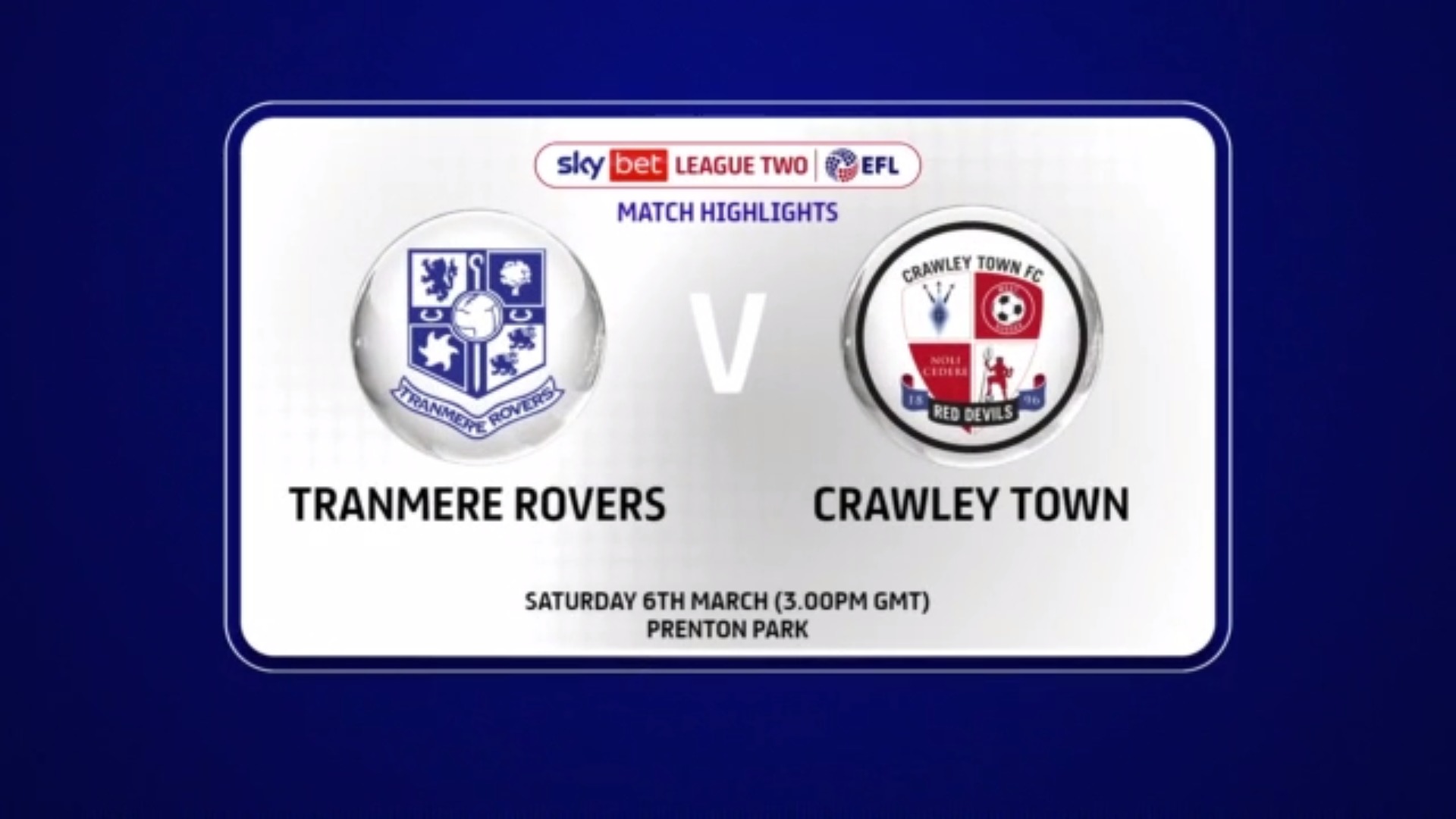 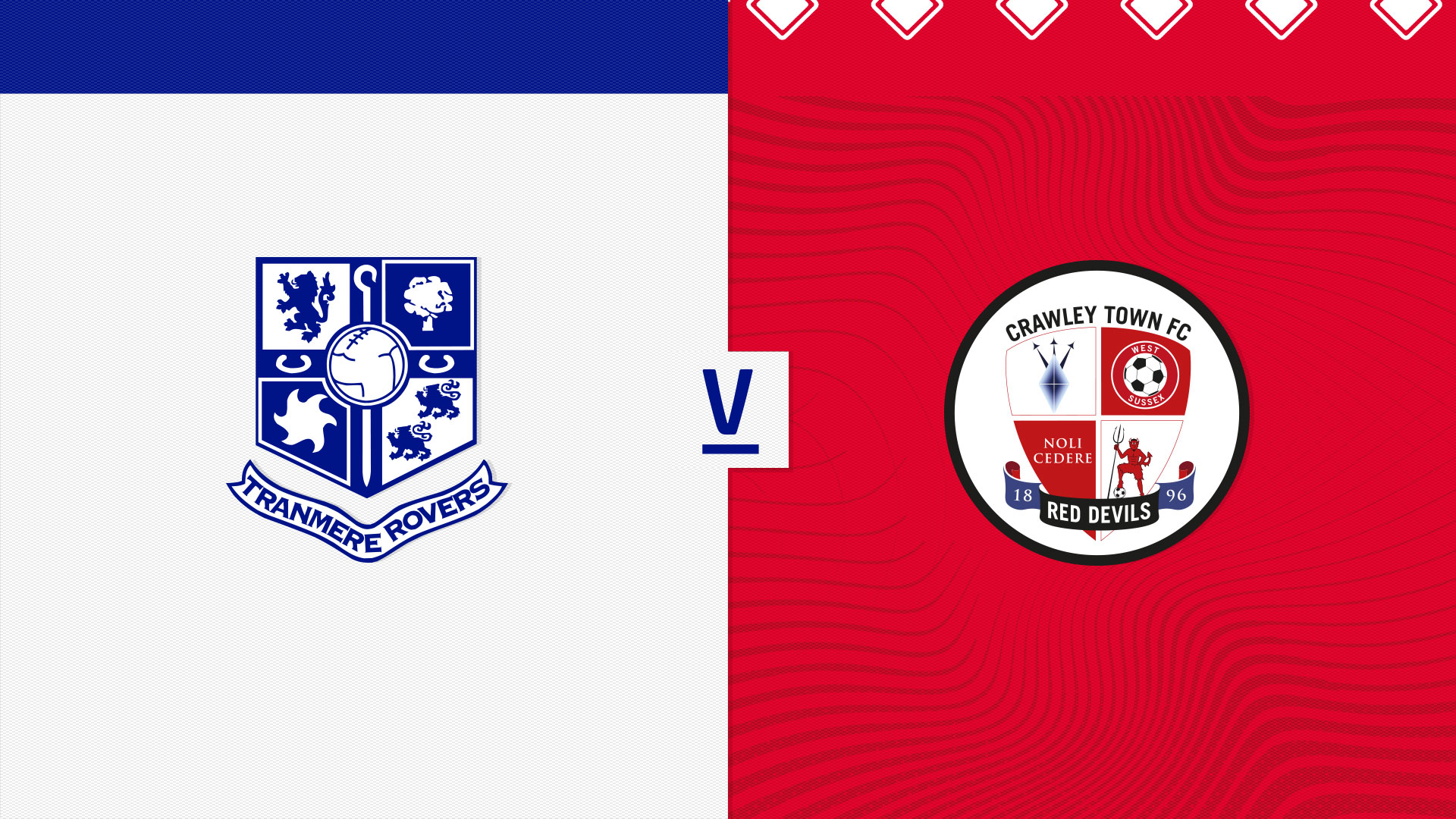 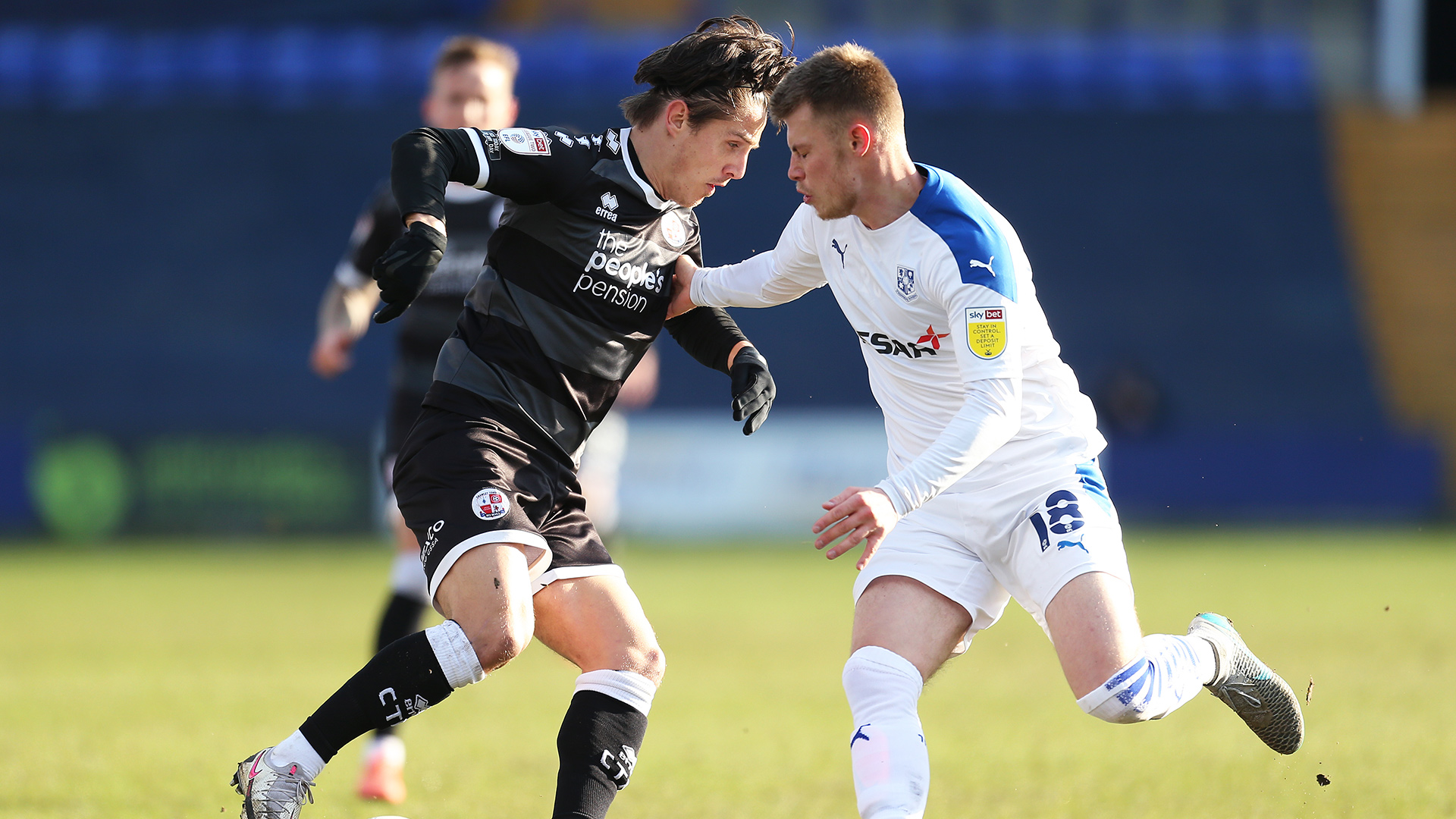