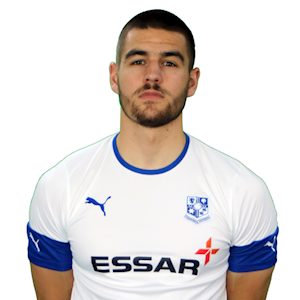 Runcorn-born Gumbs came through the ranks in TRFC’s academy to earn a professional deal in August 2014.

He made his professional debut in a 0-1 defeat against Luton Town during the 2014/15 season but since then has spent most of his time at the Club out on loan.

The 2015/16 season gave Gumbs the loan opportunities he needed to gain vital experience.

He had three loan spells that season all to Northern Premier League sides, Burscough, Trafford and Salford City where he made a combined 37 league appearances.

Gumbs has made turned out seven times for Rovers’ first-team, including two appearances last season, suffering an ACL injury in a goalless draw away at Lincoln City in April.

The 21-year-old penned a new one-year deal to extend his stay on the Wirral in June.