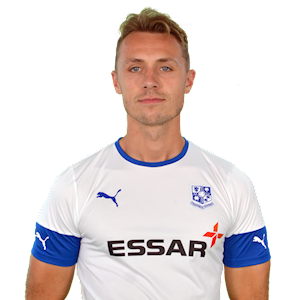 Ray, 25, linked up with Micky Mellon’s side in June after the former Crewe Alexandra captain departed Gresty Road after over a decade at the Cheshire club as a professional and youth team player.

Born in Warrington, the former Wales U21 international signed professional terms with the Railwaymen in 2011 after coming through their famed youth academy system, which he was a part of since childhood.

A loan spell at Staffordshire-based Leek Town provided a young Ray with footballing experience in 2012.

He returned to Crewe for the 2012/13 season, making history as the Alex beat Southend United 2-0 to win the Football League Trophy in May 2013, becoming the first player to make his debut in a Wembley Stadium Cup Final.

The 2014/15 term was Ray’s breakthrough at Crewe, where he played 35 times, helping the club to survival in Sky Bet League One.

In the 2016/17, and with Crewe competing at Sky Bet League Two level, Ray was appointed skipper following on from the appointment of David Artell as manager.

Ray became a key player under Artell’s management and was a part of a squad who finished 15th and 12th in the fourth-tier in the last two seasons.

He made 36 appearances in total for Crewe throughout the duration of 2018/19, scoring two goals – both coming away from home, firstly in a local derby draw against Macclesfield Town at the Moss Rose and a 1-1 draw at Oldham Athletic.

Bringing an end to his decade association with Crewe Alexandra, Ray departed Gresty Road to sign for TRFC, switching to the Wirral outfit on a two-year contract.

Ray will wear the number five shirt during his time at Tranmere Rovers Football Club.