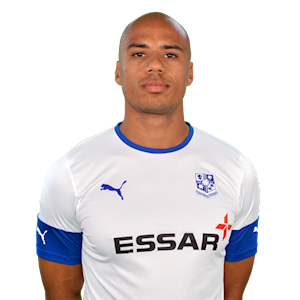 Londoner Jake Caprice was recruited by Tranmere Rovers in the summer of 2018 ahead of the Wirral Club’s return to the EFL.

Caprice began his career in Crystal Palace’s youth system, earning a professional contract with the Eagles in 2011 before departing Selhurst Park a year later.

Blackpool were Caprice’s next side, spending much of his time away from Bloomfield Road on loan at Dagenham and Redbridge, St Mirren and Tamworth.

Caprice left on a permanent basis for the 2014/15 campaign, signing for Lincoln City as he went on to make 37 appearances before switching for Woking for the following term.

Our  number 14, spent two years at Woking and impressed during his 81 appearances for the National League side and following his departure, joined Rovers’ divisional rivals Leyton Orient where he made 35 starts during the 2017/2018 season.

The 26-year-old transferred to Tranmere Rovers in July 2018 with TRFC’s number 14 turning out 41 times as Micky Mellon’s men earned promotion after winning the Sky Bet League Two Play-Off Final at Wembley Stadium in 2018/19.