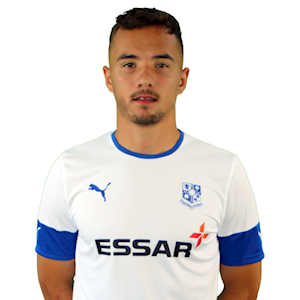 The 19-year-old came through the youth system at his parent club, signing professional terms with the Baggies in 2016.

Wilson made his professional debut for Albion in August 2016 during an EFL Cup tie as a substitute against Northampton Town.

Wilson was loaned to Exeter City in a loan deal in the summer of 2017 and made 19 appearances for the Grecians.

He then went onto step up to Sky Bet League One level in 2018/19, featuring 14 times for Walsall in the first half of the campaign.

Wilson returned to Exeter and the fourth-tier of English football in January 2019 and featured on 17 occasions for the Devon outfit.

And the teenager switched to Tranmere Rovers on loan in August, linking up with Micky Mellon’s men at Prenton Park.

Kane is available to sponsor this season. To find out more about TRFC Player Sponsorship CLICK HERE.