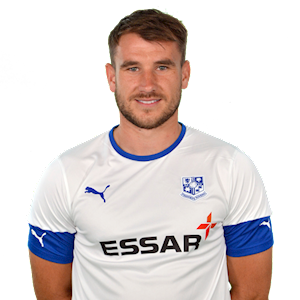 Having recently agreed a new contract with Tranmere Rovers to extend his stay at Prenton Park by a further two-years, left-back Liam Ridehalgh is the longest-serving member of the Club’s squad.

The Halifax born man began his career with Huddersfield Town in 2010 after being a part of their youth set-up since 2003. Ridehalgh grasped the chances he was given whilst with the Terriers but was sent on multiple loan spells, the first, being to Swindon Town in 2011/12 season.

His second spell was to Chesterfield in 2012/2013 season before he was recalled and instead sent to Rotherham United, making 20 appearances for the Yorkshire outfit as they gained promotion to League One.

Huddersfield then went on to loan him out to TRFC for three months the following year and he made 17 appearances, scoring one goal before his deal was made permanent.

In his six-years at Rovers, Ridehalgh has made 195 appearances, scoring two goals and has played his part in back-to-back promotions.

Last term, the 28-year-old played 25 times as he battled back from injury to play a key role in Rovers’ promotion under the Wembley Stadium arch in the Sky Bet League Two Play-Off Final.