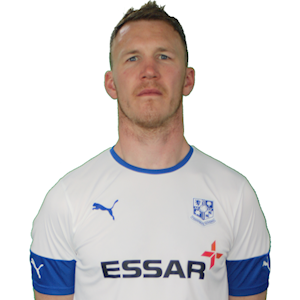 Centre-back Mark Ellis became a Tranmere Rovers player when he signed on a free-transfer in July 2018.

Having spent two seasons in Cumbria, Ellis moved to the Wirral as Micky Mellon’s men returned to the EFL.

After beginning his career at Bolton Wanderers as a trainee, Ellis left the Trotters without making a senior appearance, switching to Torquay United on a permanent basis in 2008 following a loan stay.

He stayed at Torquay until the 2012/13 campaign and his next move saw a switch to League One to join Crewe Alexandra as he helped the Gresty Road side win the Football League Trophy, (now the Checkatrade Trophy).

Ellis was released from Crewe after his second season and joined Shrewsbury Town where he made 41 appearances. Ellis, in October of the 2015/16 season, joined Carlisle United on loan and later, signed a permanent deal at Brunton Park following a string of strong performances for the Sky Bet League Two side.

In January 2017, Ellis joined Forest Green Rovers until the end of the season and made 17 appearances. At the beginning of the next 2017/18 season, he would be loaned to Leyton Orient for two months.

At the end of the 2017/2018 season, Ellis was made a Rover and he has already become a popular figure at Prenton Park having made .

The 30-year-old Kingsbridge-native made 32 appearances in a TRFC shirt as Rovers won promotion under the Wembley Stadium arch in May.