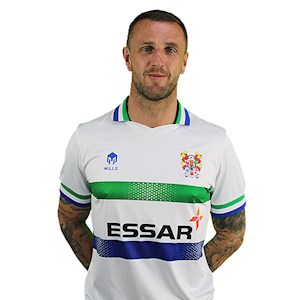 With over 750 competitive appearances over a career spanning 21 years, Peter Clarke is a trusted figure within the Rovers rearguard.

Arriving at the Club in January 2020, the experienced defender formed a formidable partnership with Mark Ellis and made a lasting impression in his debut season at Tranmere.

Clarke’s contract was extended in June 2020, with a one-year option triggered.

The Southport-born defender began his playing career at Everton, appearing in the Premier League for the Blues as well as undergoing loan spells at Blackpool, Port Vale and Coventry City during his time with the top-flight side.

Moves later down the line at Southend United, Huddersfield Town Bury, Oldham Athletic and Fleetwood Town ensured that Clarke has operated in the top four tiers of the English pyramid.

In the 2019/20 season, Clarke played in every minute of every league game for Tranmere and signed a new one year contract at the end of that season