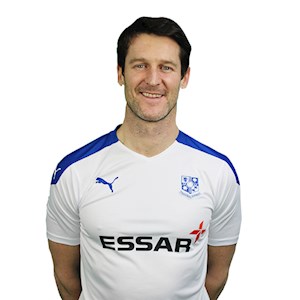 The experienced forward, 35, has made 677 appearances across a career that has spanned nearly two decades in the game.

Nugent has scored 153 club goals – including 121 in the Championship, where he leads for second-tier goals since the competition’s restructure.

Huyton-born Nugent turned professional at Bury, having come through the youth system at Gigg Lane.

In three years as a Shakers player from 2002-2005, Nugent featured on 88 occasions, scoring 18 goals during his stay.

In January 2005, Nugent switched to Preston North End of the Championship for £100,000, and he became a crowd favourite at Deepdale.

Finding the net 37 times in 107 appearances in all competitions, Nugent spent two full seasons with North End and also won a senior England cap as a Lilywhites player, scoring in his only Three Lions appearance against Andorra in March 2007.

A move to the Premier League with Portsmouth, who paid £6m to take him to Fratton Park in July 2007, saw Nugent play his football on the South Coast.

Nugent was at Portsmouth for three seasons, but he spent the 2009/10 campaign back up in the North West with Burnley, turning out in 30 of the Clarets’ matches, scoring six goals in their debut top-flight term.

Having returned from a temporary spell at Turf Moor, Nugent struck 14 goals in his final year at Pompey, who were then back in the Championship.

Nugent would then sign for Leicester City on a free-transfer in July 2011, and he would enjoy a successful time at the Foxes.

The club missed out on promotion to the Premier League in 2011/12 and 2012/13, with Nugent scoring regularly during both of those seasons, however they would go up as champions the following year, as he scored 20 in 46 games.

Nugent appeared in 29 of Leicester’s Premier League fixtures in 2014/15 as the East Midlands’ outfit retained their status in the division despite being bottom of the table at Christmas.

He was on the move again in August 2015, penning a permanent contract to become a Middlesbrough signing on an undisclosed fee.

And his eight goals in 38 Championship outings during 2015/16 helped Middlesbrough to a second-finished and promotion to the Premier League, which was Nugent’s second in two years.

In January 2017, Nugent swapped Teesside for a return to the Midlands after Derby County sealed a £2.5m transfer.

In total, Nugent played 85 games for the club in the Championship, scoring 17 goals at the Rams.

He re-signed for Preston in July 2019 and linked up with TRFC in February 2021 on loan until the end of the season.​