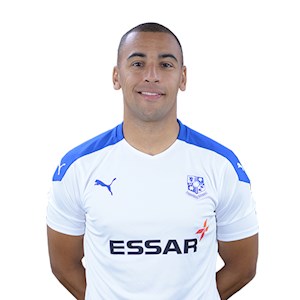 Forward James Vaughan re-joined Rovers on a permanent deal in August 2020, following a successful loan in the 2019/20 season.

The Birmingham-born striker struck three times in eight appearances for the Whites before the campaign was cut short and will now be aiming to fire Tranmere back to Sky Bet League One.

Vaughan started his career at Everton after coming through the Toffees’ youth system to become the Premier League’s youngest goal scorer against Crystal Palace in April 2005, aged 16-years and 271 days.

After 60 first-team appearances at Everton, Vaughan moved to Norwich City in 2011.

Further stints at Huddersfield Town and hometown club Birmingham City followed for Vaughan before Bury was his next side in 2016.

The 32-year-old secured later success, winning the third tier with Wigan Athletic in May 2018 prior to an EFL Trophy triumph in Portsmouth colours in March 2019.

A move to Bradford followed in the summer of 2019, where he plundered 11 goals in 25 appearances for the Yorkshire outfit as captain of the side.