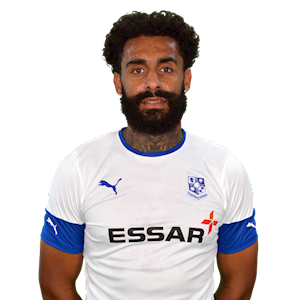 Payne agreed a two-year deal at Prenton Park having spent last term in Sky Bet League One with both Bristol Rovers and Shrewsbury Town.

A native of the Lambeth area of London, Payne began his career at Non-League level with Croydon and Sutton United before earning a move to then-Premier League club Fulham in 2009 but did not make a first-team appearance at Craven Cottage.

The striker signed for Gillingham in 2010, spending two-years in Kent where he turned out 28 times for the Gills.

In August 2013, Payne switched to Isthmian Premier Division club AFC Hornchurch, scoring 31 goals which earned him a transfer to National League outfit Dover Athletic, where he netted 33 goals in 88 games.

Payne returned to the EFL with Barnsley in 2016 and also played for Shrewsbury Town – who he reached the 2017/18 Sky Bet League One Play-Off Final at Wembley Stadium with – finding the back of the net on 14 occasions during that campaign.

Following on from his stint at the Salop, Payne swapped Shropshire for the South West by moving to Bristol Rovers in August 2018.

Payne featured 20 times in a Gas shirt prior to being loaned back to the Shrews in January.

The 27-year-old was the sixth signing of the summer transfer window at TRFC in June.