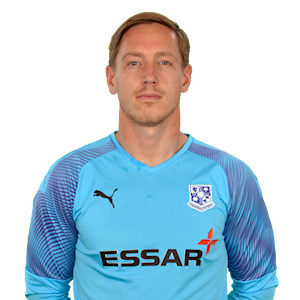 From Blackpool, Davies is a seasoned professional having previously turning out for Morecambe, Fleetwood Town as well as Accrington Stanley before making his first Tranmere start.

Davies has been a part of the football pyramid for over ten years and made his first team football debut for Morecambe in November 2005 against Bradford City.

After five years, 16 appearances and a Conference National Play-Off win for Morecambe in 2007, Davies moved to Fleetwood Town in 2010 where he played 150 times.

Davies battled for the number one jersey in his first season with fellow shot-stopper Danny Hurst, however, a dislocated shoulder injury for Hurst opened up the starting spot and Davies would use the opportunity to cement his place between the posts.

A five-year spell followed with Fleetwood which included a Conference Title in the 2011/12 season, as well as two loan spells. The first, back to Morecambe in 2014, the second, to Accrington Stanley in 2015 where he made a combined 29 appearances in the two years prior to joining TRFC.

The 32-year-old joined Tranmere in July 2015 on a one-year contract but extended his stay until 2020 and has made 170 appearances for TRFC.