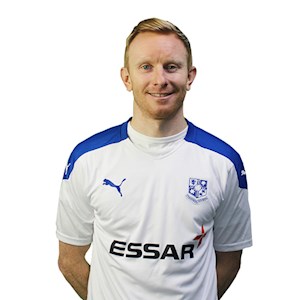 The Scottish attacking midfielder, 29, reunites with manager Keith Hill having previously worked with him at BWFC

Crawford started out his playing career in his homeland for Hamilton Academical, progressing into the first-team to make his debut for the club against Dundee United in January 2010.

He would go onto make a total of 271 appearances in all competitions for the Accies and was a part of the side who were promoted back up to the Scottish Premiership through the play-offs in 2014 under Alex Neil’s management.

Crawford’s performances north of the border at New Douglas Park led to interest from English clubs, and in July 2018, he made the move to Doncaster Rovers.

His next transfer would be a switch to Bolton in September 2019, penning a deal with the Greater Manchester club, where he was managed by Hill.

Crawford has featured in 33 matches for Wanderers, including 24 in this campaign, before linking up with Rovers at Prenton Park on loan in February