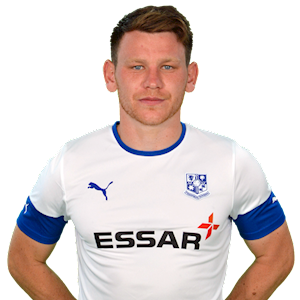 Wembley Stadium hero Connor Jennings is now in his fourth season as a Tranmere Rovers player having joined in July 2016.

The Mancunian scored a 119th minute winner to seal promotion for TRFC as they beat Newport County 1-0 in the Sky Bet League Two Play-Off Final at Wembley Stadium in May.

His form earned him a move to League One side Scunthorpe United in the winter of the 2011/12 campaign and was loaned out in the November of the 2012/13 season to Conference Premier team Stockport County.

He would spend two further loan spells away from Scunthorpe during the 2013/2014 season, the first to Macclesfield Town and the second to Grimsby Town.

Jennings left Scunthorpe in the summer of 2014 and signed for Wrexham where he would spend the next two seasons, appearing 86 times and scoring 20.

in June 2016, he would then join Tranmere and after spending part of the first year on loan at Macclesfield, returned to establish himself as a first team regular for Rovers.

The 27-year-old attacker, a fan favourite at Prenton Park, has made over a century of appearances for TRFC – and will go down in Tranmere history after his Wembley Stadium winner secured back-to-back promotions for Micky Mellon’s men.