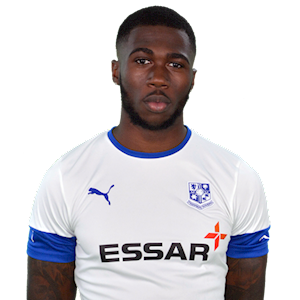 Former England U17 youth international Corey Blackett-Taylor became a Tranmere Rovers player after he agreed a two-year contract at Prenton Park in June.

Birmingham-born Blackett-Taylor began his career as a part of Aston Villa’s youth system, coming through the age groups to earn a professional deal at Villa Park.

Whilst competing for Villa’s U18 side, he was a member of the team who won the Hong Kong Sevens in 2016.

Blackett-Taylor made his first-team debut as an 87th minute substitute for Neil Taylor during a 1-0 defeat away to Huddersfield Town in March 2017.

He played his second game for the club and his first in front of the Villa Park crowd in a 2-0 defeat against Middlesbrough in the Carabao Cup back in September 2017.

Blackett-Taylor was loaned to Walsall in January to gain first-team experience, where he turned out 10 times for the Saddlers in Sky Bet League One.

Upon leaving Villa, the 21-year-old signed for Micky Mellon’s side as he linked up with TRFC.

Bootlace sponsor: Sam and Will Fitch