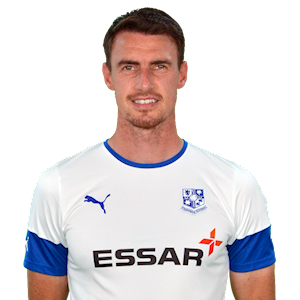 Liverpudlian Potter returns to his native Merseyside after completing his free-transfer to Prenton Park having made over 400 appearances in the EFL.

Beginning his playing days in the youth set-ups at Everton and Blackburn Rovers, Potter turned professional at Liverpool in 2003.

He made 10 appearances in 2004/05 including three games in the early rounds of the UEFA Champions League against Graz AK and German Bundesliga outfit Bayer Leverkusen as the Reds went onto win the competition for a fifth time in Istanbul.

A loan stay at Wolverhampton Wanderers in 2006 turned into a permanent move to Molineux for £250,000, where he made 56 appearances during his stay in the Black Country.

A move to Sheffield Wednesday later materialised, having initially linked up at the Owls on loan, Potter became a permanent recruit at Hillsborough in 2009, featuring on 96 occasions in the Championship and League One.

In July 2011, Potter swapped South Yorkshire for Buckinghamshire when he signed for MK Dons on a free-transfer.

Over the next six years at Stadium MK, the former Republic of Ireland international would rack up 229 league appearances for the Dons in both the Sky Bet Championship and Sky Bet League One.

Potter was a part of the squad who reached the second-tier of English football for the first time in May 2015 as they finished runners-up behind champions Bristol City.

After a prolonged MK Dons career, Potter spent two-years with Rotherham United between 2017-2019 before the 34-year-old agreed a deal at Tranmere Rovers in June 2019.