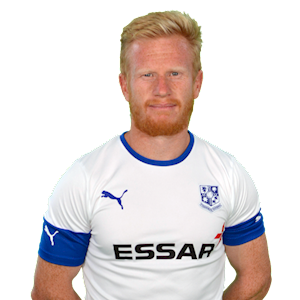 The Heysham-born midfielder, aged 37, began his career at local side Morecambe, making his debut for the Shrimps aged 18 in 2000 before going on to make 178 league appearances over a seven-year stay.

In 2007 he joined Rochdale, making 60 appearances in two seasons at Spotland under Keith Hill, prior to securing a move to Colchester United in July 2008 for an undisclosed six-figure fee.

Perkins would ply his trade in Essex for three-years, where he turned out 79 times in the league, with loan spells at Chesterfield and Stockport County included during Perkins’ time at the U’s.

His performances at Colchester earned him a transfer to the Championship in the summer of 2011, with former boss Hill signing him at Barnsley, where he also worked with his new manager at TRFC, Micky Mellon.

At Oakwell, Perkins was a regular in the Tykes’ first-team, making 91 appearances in the second-tier for the South Yorkshire club.

In January 2014, Perkins returned to the Lancashire coast when he signed for Blackpool on a free-transfer, agreeing an 18-month deal at Bloomfield Road, featuring on 65 occasions at the Seasiders’ before leaving after their relegation to League One.

After leaving Blackpool, Perkins was snapped up by Wigan Athletic, and enjoyed success with the Latics at the DW Stadium.

A two-time League One champion, Perkins became a fan favourite in Wigan colours, where in 82 league appearances over his three campaigns, with two of them coming in the third-tier, he scored one goal for the club, which came against his former side Blackpool in a 3-1 triumph at Bloomfield Road back in October 2017.

At the end of his second title winning season at Wigan, Perkins returned to Rochdale in May 2018 to link up with Hill for a third time.

Perkins made 21 appearances in his second stint at Dale before agreeing to sign for Tranmere on an 18-month deal, reuniting with Mellon in the process.

He made 17 appearances and played a key part as TRFC earned a second successive promotion after winning the Sky Bet League Two Play-Off Final at Wembley Stadium in May.