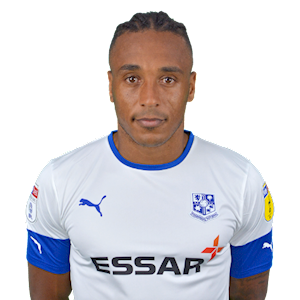 Midfielder Neil Danns moved to Tranmere Rovers on a deal until the end of the 2019/20 season in September.

The 36-year-old Liverpudlian began his playing career in the youth ranks at Blackburn Rovers, featuring in the Premier League at Ewood Park after turning professional in 2000.

He was loaned away from East Lancashire to Blackpool, Hartlepool United and Colchester United followed before Danns signed permanently for the latter in 2004.

He won his first promotion with the Essex club as they finished runners-up behind Southend United in League One during 2005/06.

After 63 appearances at the U’s, Danns moved on to Birmingham City in 2006 for £500,000 and won another promotion with the Blues at St Andrew’s in his first campaign as they earned a top-flight return.

In 2008, the Merseyside-native moved to the capital when Crystal Palace secured his services in a £600,000 switch.

Over the next three-years playing his football at Selhurst Park, Danns turned out 103 times for the Eagles in the second-tier.

Danns’ next transfer was to Leicester City in 2011, but he would spend much of his time at the Foxes away from the club on loan deals.

Temporary spells at Bristol City, Huddersfield Town, and Bolton Wanderers were next on Danns’ agenda as he looked for more playing time.

Having been released from Leicester, Danns joined Bolton permanently in July 2014 and would become a key member of the Trotters’ midfielder for the next two seasons in the Sky Bet Championship, featuring on 106 occasions.

Danns would later spend three seasons at Bury after departing Bolton in 2016. His first campaign at Gigg Lane saw him loaned out to Blackpool for a second Bloomfield Road stay, where he helped the Tangerines to Play-Off promotion from Sky Bet League Two in May 2017.

He returned to his parent club and was appointed captain by boss Ryan Lowe, as the Shakers won promotion from England’s fourth-tier in 2018/19.

Capped by Guyana at international level, Danns was a part of the squad for the 2019 Concacaf Gold Cup, where he scored three goals.

And in September, Danns linked up at Prenton Park for the rest of the 2019/20 campaign