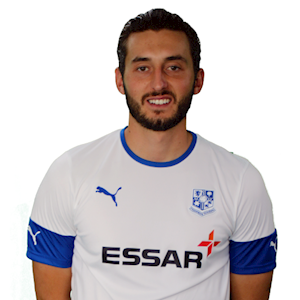 Banks returned to Prenton Park in July 2018 having been on loan in the previous National League campaign at TRFC.

Beginning his career at hometown club Rotherham United, Banks turned professional with the Millers in 2012 after coming through their youth set-up and would be loaned to Non-League teams Sheffield FC, Buxton and Stalybridge Celtic.

During the 2012/2013 season, the midfielder played for Gainsborough Trinity, Scarborough Athletic, North Ferriby United and FC United of Manchester.

In September of the 2013/14 campaign, he joined Chesterfield, signing a professional contract at Proact Stadium. He went on to score 13 goals in 99 appearances and even spent time away from the club on loan at Northampton Town.

2017/2018 began with a loan spell to Tranmere Rovers as well as a loan to Swindon Town. He made a total of 25 loan appearances for Rovers that season before signing for Tranmere permanently in time for life back in the EFL.