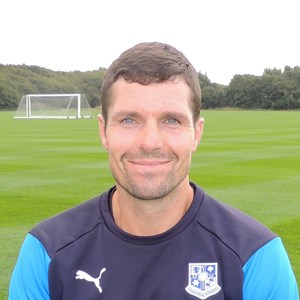 Runcorn-born Michael Jackson began his playing career as a trainee at Crewe Alexandra, making five appearances for the Railwaymen after turning professional at Gresty Road.

Jackson became a key member of North End’s defence in his seven years at Deepdale, making 251 league appearances for the club during his stay.

Having spent the 2002/03 season on loan at Tranmere Rovers, Jackson signed a permanent deal at Prenton Park in May 2004, making 84 league appearances on the Wirral over two years.

Jackson ended his career with spells at Blackpool, who he won promotion to the Championship with via the Play-Offs in 2006, and Shrewsbury Town.

He later managed Shrewsbury before becoming assistant to former TRFC team-mate Micky Mellon at the Salop, as the pair guided the club to promotion from League Two in 2015.

In October 2016, the 45-year-old returned to Tranmere alongside Mellon following the Scot’s appointment, with Jackson part of another promotion in May 2018 when Rovers returned to the EFL after the Wembley Play-Off victory.