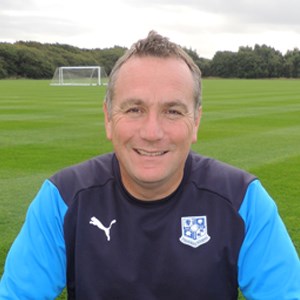 Micky Mellon returned to Tranmere Rovers as manager in October 2016 after two spells as a player at Prenton Park.

A native of Paisley, Scotland, Mellon started his early career with stays at Bristol City, Cork City and West Bromwich Albion before linking up with Blackpool in 1994.

Mellon made 125 league appearances for the Bloomfield Road during three-years with the Seasiders and later moved to Tranmere for £300,000 deal – turning out 57 times in Division One

Two-years at Burnley followed before Mellon was back at Tranmere for a second spell, making 115 league appearances between 2001-2004 before ending his career at Kidderminster Harriers, Witton Albion and Lancaster City.

Taking in coaching roles at Lancaster and Burnley’s youth side, Mellon took over Fleetwood Town in September 2008, guiding the Cod Army to two promotions up to the EFL.

Mellon was Barnsley assistant manager to David Flitcroft before returning to management with League Two Shrewsbury Town in May 2014.

He secured automatic promotion to League One with the Salop in 2015 before becoming Tranmere boss in October 2016.

The 46-year-old enjoyed success at Wembley last May, as Rovers were promoted back to the EFL after a 2-1 win over Boreham Wood.

Another promotion followed for Micky and Rovers as he guided the Club to back-to-back promotions after defeating Newport County at Wembley in 2019.