The close season has been anything but quiet at the Club, so we thought it would be helpful to bring you up to speed with some of the work that is going on to make your match day experience more enjoyable: 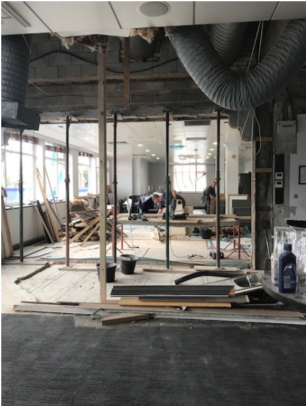 One of the most visible improvements will be the changes to the Gold and Silver lounges.  In order to create more efficient space and reduce the pinch point between the two rooms, they have been knocked together and the bar will be moved to the side of the room.  This makes the room much more flexible for functions but should also make a much better environment for Gold Lounge users.

As can been seen from the picture below, there is a lot still to be done, but the work will be complete in time for the first home game of the season.

We have significantly upgraded the equipment in the main kitchen (between the Platinum Lounge and the Boardroom).  This includes the installation of two 20-grid Rational steam ovens which should enable us to get better quality food out, faster, than would have been possible in the past.  For those of you lucky to have dined at Club Wembley for our play-off final, we are using the same system as is employed there.  This should be a marked improvement on the past.

Many of the people who come to our matches are there thanks to the generosity of everyone who has donated to the #SWA2 scheme, which enables disadvantaged groups to come to the game and have some semblance of “normality” in their life.   Amongst these are people who find themselves homeless, and others facing severe economic hardship.   Research by Plan International shows that 10% of girls in the UK have at some point in the last year been unable to afford sanitary products.  We don’t want anyone coming to our games to face the humiliation of not being able to afford such essentials, and so we will be providing them for free, courtesy of an initiative from the Tranmere Supporters’ Trust.

We know our toilets are not up to the standard we would like them to be.  Together with support from the Trust and TROSC, we are commencing a programme to improve them, with prioritisation based on an assessment of where the most urgent need is.  We are starting with the toilet block between the Town Paddock and the Cowsheds, but this will be a rolling programme that will continue throughout the season.

The televisions throughout the stadium proved unreliable last year for a variety of reasons – some to do with faults developed on individual TV sets, but mostly due to repeated failures of the distribution box, which pushes the signal around the stadium.  This is being reviewed by a specialist and we expect to have any issues resolved by the start of the season.

Cowshed Catering was introduced from scratch at the start of last season and we will be continuing  it (and hopefully expanding to include some outside catering) this season.   Please give it a try – remember, eating and drinking at the ground ensures that all cash goes straight back into the Club.

Of course, in addition to this are the usual upgrades we do in close season – repainting walls, replacing broken or rusted seats etc.  As ever, it will be tight to complete all the work in time for kick off, but I am confident we will get there.